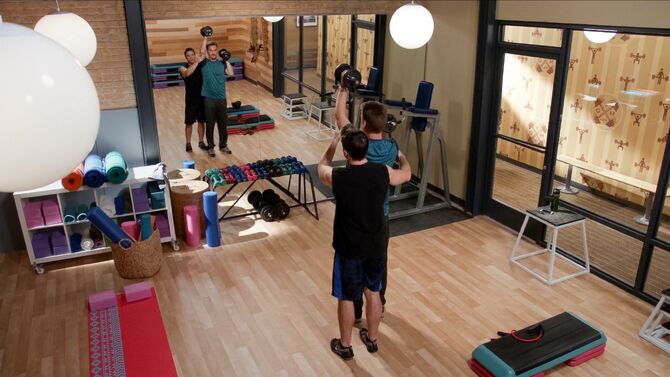 24 Hour Gym West Covina excercise center which is open both day and night
Location: West Covina, California — Debut: "Josh and I Work on a Case!"

24 Hour Gym is a exercise facility franchise located on East Cameron street in West Covina, California. The gym is open at all hours and offers exercise machines, weight lifting equipment and work out classes for its members. Personal trainers such as West Covina native Josh Wilson are also provided. The gyms first appearance was in the Season One episode "Josh and I Work on a Case!".

Darryl was shaken by his last encounter with Josh Wilson at his apartment when he helped him clean up after his PPV party. Josh kissed him on the cheek before he left which both intrigued and confused Darryl. He went to the 24 Hour Gym Wilson worked at to investigate the matter further. Darryl got Wilson assigned as his personal trainer who put him through a few barbell exercises. During a rest period, Darryl awkwardly broached the subject of the kiss. White Josh told Darryl he was gay and gave him a kiss because he thought he was cute. Darryl was surprised by this but Wilson told him everyone already knew.

Darryl got defensive when Josh suggested he was gay too and left the gym. He returned the following day to prove Wilson wrong and told White Josh he will no longer need his services as he signed up for cardio mambo classes. Wilson was amused by this and pointed out this doesn't disprove his theory. When the class started Darryl ogled the derrière of the woman in front of him. He then noticed the backside of the man who was to her left. His attention was drawn between them which led to an epiphany that he might be attracted to both sexes. When the class came to an end Darryl reflected on this revelation in the emptied studio.

Some time later, Darryl went back to the gym after having accepted his true orientation. He found White Josh and declared himself to be 'both-sexual'. Wilson tried to tell him he meant 'bi-sexual' but was cut off when Darryl kissed him ("Josh and I Work on a Case!"). Darryl returned to the gym the next day and found White Josh working out. He thanked him for the previous kiss before going in for another. He then asked Wilson if he'd like to join him for drinks later but Josh was wary when Darryl rejected his suggestions of local bars. He told Darryl that he refused to go back into the closet for anyone and walked off claiming that he needed to get back to a client he just remembered ("Josh and I Go to Los Angeles!").