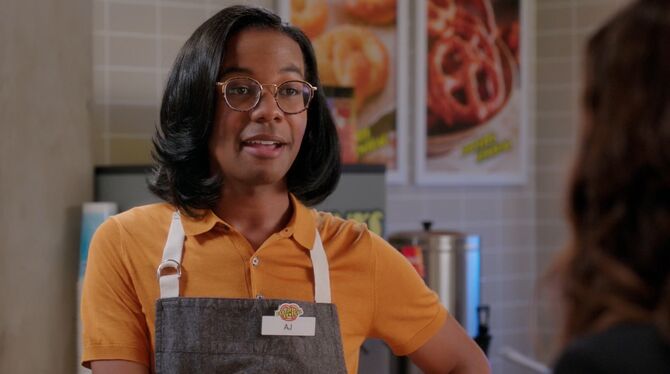 AJ is a Law student and roommate of Rebecca Bunch who currently works at the her pretzel shop. He has experience in the food service industry having previously worked at two different Pretzel Central locations. His first appearance was in the Season Four episode "I'm On My Own Path." He is portrayed by actor Clark Moore.

In 2018, AJ was an undergraduate studying pre-law who wanted to become a lawyer. Needing work and having had previous experience at a Pretzel Central location he applied for a job when another franchise shop opened. It was inside the lobby of the office budding located at 7333 West Hacienda road and owned and operated by Jim Kittsworth. AJ was hired and only later learned that his new boss was once a lawyer. An attorney named Rebecca Bunch was once Kittsworth co-worker at the law firm Mountaintop and was shocked to see him there. Jim explained to both AJ and Rebecca he hated being a lawyer. When AJ mentioned he was studying to become one Jim tried to dissuade him from pursuing a legal career (♫ Don't Be A Lawyer ♫).

Rebecca told AJ not to listen to Jim and ordered a pretzel to go. It’s the that AJ recognized Rebecca as the local celebrity "The Rooftop Killer" and told her he dressed up as her for Halloween. He was surprised when not too long afterwards Rebecca applied for a job at the pretzel shop. She was enthusiastic about the work and even forgot to charge some customers which AJ pointed out to Jim. When Rebecca has ideas for new pretzel recipes both AJ and Jim pointed out they couldn't deviate from guidelines corporate set down. AJ recalled his time at the Claremont Pretzel Central when his manager there put too much frosting on his pretzels. Corporate banned him from the franchise and him excommunicated.

AJ was there when Rebecca's former co-workers from her firm visited and she gave them the excuse that she was waiting on the bar association reinstating her. Unbeknownst to Rebecca, AJ had seen a letter from the state bar which she tossed in the trash which stated she was clear to practice law. AJ confronted Rebecca about this and she pleaded with him not to tell anyone. She also confirmed his suspicions that she didn't want to return to being a lawyer. Ultimately Pretzel Central was shut down by corporate due to various violations that Rebecca incurred ("I'm On My Own Path"). However, AJ wasn't out of a job for too long as Rebecca decided to purchase the location and open her own pretzel shop there.

The shop was now called "Rebetzel's Pretzels" and AJ was hired there by Rebecca. One day she discussed with AJ her family problems but he got cut off when he tried to talk about his own issues with his mother. When Rebecca's half-brother Tucker Bunch showed up, she left AJ in charge so she could spend the day with him ("I'm Making Up For Lost Time").

AJ becomes Rebecca's roommate when her ex-boyfriend Josh moves out ("I'm In Love").