A Boy Band Made Up of Four Joshes 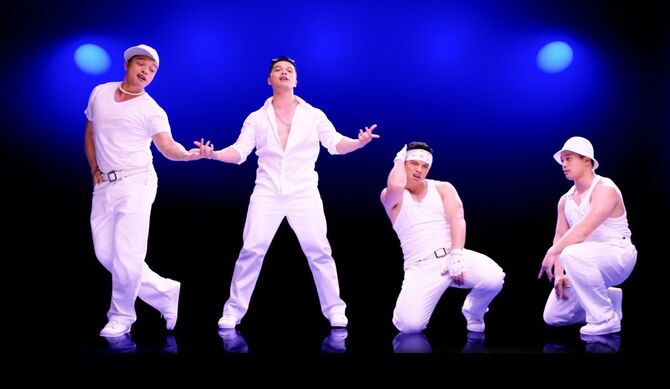 A Boy Band Made Up of Four Joshes
Performer(s): Josh Chan — First Appearance: ""I Hope Josh Comes to My Party!"

"A Boy Band Made Up of Four Joshes" is a song Rebecca imagined being sung to her by four different Josh Chans. It was first heard in the Season One episode "I Hope Josh Comes to My Party!". The song is track number 9 on the Crazy Ex-Girlfriend: Original Television Soundtrack (Season 1 - Vol.1).

The song is a clear parody of various popular boy band acts of the 1990's. Several dance moves depicted onscreen during the four Joshes preformances mimics choreography and hand gestures used by NSYNC from thier music video for the song "Bye Bye Bye".

Vincent Rodriguez III was interviewed by Entertainment Weekly about the song and music video for "A Boy Band Made Up of For Joshes". He mentions he was a big fan of boy bands as a teenager, particularly *NSYNC. Filming for all the four Josh's parts took about six hours and each Josh was given his own personality reflected by thier dance moves. You can read the full interview HERE.