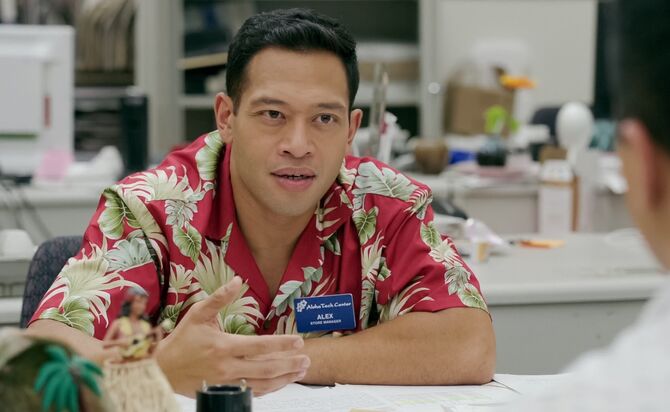 Alex is the manager of a local West Covina, California big box store called the Aloha Tech Center. It was imperative for the harmony of the store that Alex hired someone whose demeanor fit its atmosphere: laid back, chill and easy going. He interviewed a number of people for the assistant manager position and after some convincing eventually hired Josh Chan. Alex was first seen in the Season One episode "I'm Going on a Date with Josh's Friend!". He was portrayed by actor Eugene Cordero.

'In October 2015, Alex needed to hire an assistant manager at the Aloha Tech Center. He had a help wanted sign put up prominently above the checkout center. A regular customer by the name of Josh Chan spotted the sign while browsing the store and decided to apply for it. He returned later and handed in his finished application which made its way to Alex. He called Josh in for an interview where he went over the information he turned in. Everything seemed okay until Alex read the essay portion which raised a red flag. The content had Alex concerned as he finished reading the essay and he warily eyed the applicant.

Uneasy with the look Alex gave him, Josh asked him if everything was alright. Alex replied that after having finished reading his essay he felt Josh was overqualified for the job. The essay was such an intellectual dissertation which actually referenced Kafka that Alex wondered if Josh went to Harvard. He also questioned why he would apply as there was no mention of anything related to the store such as a love of electronics. Alex told him that he should probably work somewhere better suited to him like the library. Josh insisted he was exactly the laid back and chill employee he was looking for but Alex disagreed and didn't hire him.

The next day Alex was surprised to see Josh again, this time being led back into the store by a friend of his named Rebecca Bunch. She insisted on meeting with Alex about rejecting Josh and argued about the contents of the essay. She argued the Harper Lee section was an expressive insights into the applicant. Alex asked her if she could step outside as Josh mouthed an apology to him for this disturbance. Rebecca than gave impassioned speech about how lucky the store would be to have Josh as an employee. Moved by the intensity of her words Alex reconsidered and hired Josh ("I'm Going on a Date with Josh's Friend!").

One morning Alex went into the offices of the Aloha Tech Center only to hear a popping sound behind him. He thought the store the store was being robbed only to turn around and find Josh Chan sleeping on a makeshift bed made of packing materials. He explained to Alex he had nowhere else to stay and pleaded with his boss to let him sleep at the store for awhile. Alex told Josh it wasn't possible as it was unprofessional and also pathetic. He pointed out to Josh that he was only a year younger than him and that he already had a wife, a house and kids. Alex told Josh he needed to get his act together and figure his problems out ("Where Is Josh's Friend?").

Alex was again surprised some time later when he found Josh act the office early but this time working. He had organized the back room even though his shift started much later. Josh said he came in to sort some things out in his head due to some personal drama he just went through including breaking up with two different women. Alex told Josh he was just like him once, a "Girlfriend Guy" who didn't like being by himself for too long. Josh denied this but Alex told him he'd get used to it. Later, Alex received a call from the annual Electric Mesa event because the sound system they bought from the store had broken down. He sent Josh to the event to fix the equipment ("Why Is Josh's Ex-Girlfriend Eating Carbs?").

“Hey look bro, Aloha is really just a laid back store, okay? And our employees are just laid back and chill...so someone who gets this upset about Harper Lee and whether the book was a prequel or first draft does not sound chill.”— Alex
“No, no! I'm chill! I'm so chill! You know the whole Harper Lee thing, that was because I love her husband! You know Bruce Lee!”— Josh
“I just think, based on this essay, you're not going to be very happy here”— Alex

Retrieved from "https://cxg.fandom.com/wiki/Alex?oldid=17664"
Community content is available under CC-BY-SA unless otherwise noted.