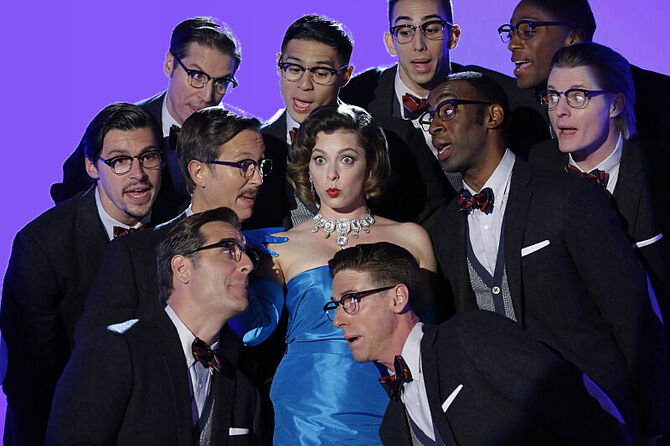 All Signs Point to Josh...Or is it Josh's Friend?

Rebecca is at Cup of boba talking to a polyamorous trio on the pretext that she is interviewing them for an article. Instead she is researching the possibility of having a similar arrangement with Josh and Greg. They tell her the situation is more of a love triangle which makes her fantasize a musical number (♫ Love Triangles ♫). Later in therapy, Rebecca discusses her romantic troubles with Dr. Noelle Akopian. The doctor believes she is misinterpreting things as neither man is offering her a relationship. Rebecca ignores Akopian and elects to look for signs from the universe to decide who to choose. Over at the Serrano residence, Greg is shocked when his father tells him he's sold the house.

Marco made enough from the sale to afford a plush retirement home and also to give Greg money so he can finally go to Emory University. Meanwhile at work, Rebecca complains to Paula about her problem. It's then a new app on thier her phones alerts them to the start of thier periods. They wonder why their cycles haven't begun when Darryl shows up having received an alert on his own app. As he talks about a bridge he and White Josh discovered Rebecca vomits in a nearby trash can. She concludes she's pregnant with Josh's child because she's late and nauseous. Rebecca ignores Paula's advice to get tested believing this to be a sign.

At the park, Greg talks about going to Emory to his sponsor Guardrail who offers to set him up with a new sponsor in Atlanta named Barry. Greg is still unsure about this and annoys Guardrail with his indecisiveness. That night when Josh goes to Rebecca's place he notices a bottle of prenatal vitamins. Rebecca announces she is pregnant and rambles on about thier future together. She goes to use the bathroom only to learn her she's not with child since her period started. When she informs Josh and tries to initiate sex (♫ Period Sex ♫) he angrily rebuffs her. He declares the pregnancy scare is a sign they should stop seeing each other and leaves.

Rebecca goes to law firm the next day and after telling Paula what happened decides to skip work and go for a walk. Paula leaves as well worried that she hasn't had her period yet like Rebecca and meets Scott at home. Her husband urges her to take a pregnancy test but Paula is too afraid of what the results might be. Meanwhile, Rebecca is wandering around the park when she sees Greg on the Heritage Bridge Darryl told her about. She approaches him and both are amazed by the coincidence of running into each other. After they banter a bit, Rebecca turns to go when Greg suddenly pulls her into a kiss. Rebecca tells Greg she'd like to try again with him and that if he agrees to meet her at the bridge tomorrow at sunset.

Sometime later, Rebecca discusses this recent development with Dr. Akopian who is frustrated her patient now believes Greg is the one she's meant to be with. At the Serrano residence, Greg is criticized by his father for giving up on his dream of Emory for Rebecca. Meanwhile, Darryl tells Paula he pulled some strings and arranged for her to start law school this semester. Paula becomes emotional over this news along with the possibility she may be with child. She bursts into tears ruining the festive atmosphere Maya and the other staff tried to create. Over at the park, Rebecca waits on the bridge while a distance away Greg decides not to make the rendezvous upon literally seeing a warning sign.

After being stood up Rebecca went home and drank wine until she fell asleep. The next morning she discovers from a snapchat alert on her phone that Greg is leaving town. As she races to LAX, Greg is there being seen off by his friends. Once Greg says goodbye to Chris, WhiJo and Hector only he and Josh are left. Josh tells him he can always come back only to realize Greg doesn't intend to return. Josh then expresses his regret about Rebecca but Greg tells him it's all in the past now. They share a hug before Josh leaves and Greg heads for the boarding gate. Rebecca arrives at the airport and spots Greg ascending an escalator. She manages to catch up with him and demands to know where he is going.

At the Proctor residence, Scott and Paula are looking at the pregnancy test she just took which turned out positive.

Retrieved from "https://cxg.fandom.com/wiki/All_Signs_Point_to_Josh...Or_is_it_Josh%27s_Friend%3F?oldid=15213"
Community content is available under CC-BY-SA unless otherwise noted.