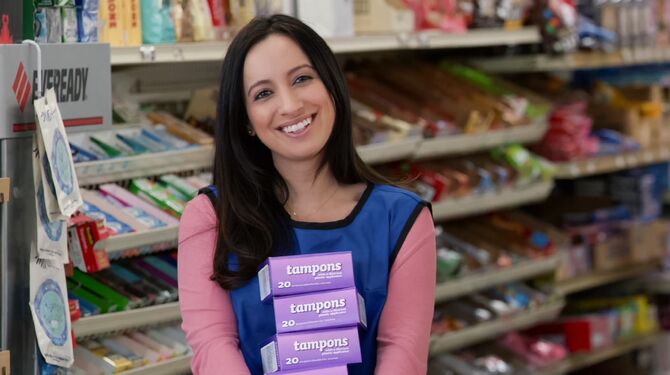 Ally is an employee at the Country Market grocery store in West Covina, California. She got hired there just to chase after an employee she was attracted to named Brody. Ultimately she decided to stop pursuing her crush and go back to school instead. Her first appearance was in the Season One episode "Josh's Sister is Getting Married!". She is portrayed by Sofia Marie Gonzalez.

Ally was working as a manager at a Whole Foods grocery store when she became smitten with an employee at Country Market named Brody. She impulsively quit her job and got hired at Brody's store just to be near him. While she was working there she caught the eye of another employee named Marty. He continually tried to woo her texting her constantly and making grand gestures like skywriting. Ally told him she wasn't interested while she herself continued to flirt with Brody. One day while Ally was stocking feminine products on aisle four, Marty tried one more time to win her over. This time he serenaded her on the sales floor with a song he wrote (♫ Clean Up on Aisle Four ♫).

Ally left the aisle she was working on and was actually moved by the performance. However, her attention was stolen by Brody who interrupted the song by doing a series of cartwheels in front of her. Ally forgot about Marty and chased after Brody pleading with him to teach her how to tumble. Sometime later, Ally was approached by a friend of Marty's Greg Serrano who asked her to give the guy a chance. She told Greg she found Marty's repeated attempts at wooing her to be sad when she made it clear each time she was uninterested. She'd reconsider giving Marty a chance if he backed off but all he's doing now is annoying her. Ally then asked Greg to tell Marty to stop his embarrassing public displays of affection.

Later, Brody stopped the flirting and finally asked Ally out to dinner. Ally met up with him in the park at the hot dog stand eager for the date. Her excitement came to an abrupt halt when Brody called her by the wrong name. It got even worse when he dropped the charm and asked her when they were going to have sex. It then dawned on Ally that she made yet another in a long line of bad romantic decisions. She called Brody an idiot and told him how horrible a person he was. She then chastised herself for not pursuing a relationship which actually might stand a chance at working. Before she stormed out on Brody, Ally decided to quit her job at Country Market and go back to nursing school ("Josh's Sister is Getting Married!").

Ally became romantically involved with Marty after breaking up with Brody. However, she was disinterested in Marty as a person, and only dated him because she wanted to be married. At some point she was promoted to bread manager at the grocery store. Ally also carried out an affair with Bev, the beverage manager at the same store; Marty was fully aware of Ally's cuckoldry and wrote several songs about it. Ally and Marty hired Valencia Perez to plan their engagement party at Home Base. While at the party Ally grew bored and invited Bev to come visit, cautioning him to bring a date so it didn't look suspicious. Rebecca caught Ally and Bev making out in a closet. Rebecca revealed the betrayal to Marty unaware he already knew everything ("Nathaniel Gets the Message!")

Rebecca Bunch imagines a musical performance which includes a number of West Covina residents she met in real life. Ally is amongst the various people she to appear in this fantasy sequence which extols the virtue of taking antidepressants ("I Have To Get Out").