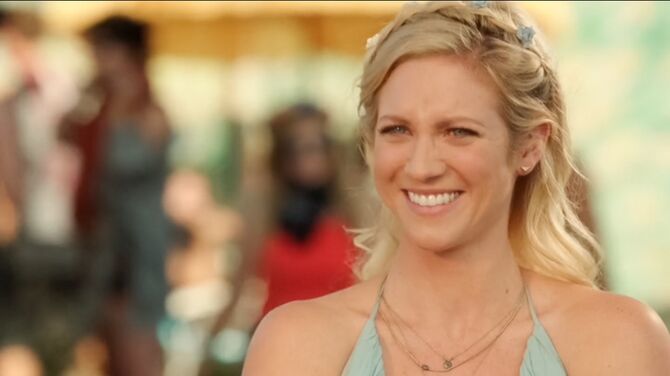 Anna Hicks is a Beauty mogul and former girlfriend of Josh Chan. They met when he was answering a tech support call for his job at a festival she was attending. They started dating soon after much to the displeasure of Josh's ex-girlfriends Rebecca Bunch and Valencia Perez. Ultimately she broke up with him after a sudden change of heart. Her first appearance is in Season Two episode "Why Is Josh's Ex-Girlfriend Eating Carbs?". She is portrayed by actress Brittany Snow.

In 2016, Anna Hicks attended the annual San Gabriel Valley festival Electric Mesa. During the event the electronic sound system needed to be repaired. A call was made to the Aloha Tech Center who sent out an employee named Josh Chan to fix the problem. Once he finished, Anna went to talk to Josh and thanked him for his work. She was amused by his awkward reaction to her and gave him her contact information in case he wanted to see her again. At the time he had just broken up with two women recently and was trying to avoid another relationship. Ultimately he decided to call her anyway (♫ Thought Bubbles (reprise) ♫) ("Why Is Josh's Ex-Girlfriend Eating Carbs?").

Anna and Josh texted each other frequently once he contacted her ("Who Needs Josh When You Have a Girl Group?"). Although she lived in Silver Lake they began to see each other. They officially started dating after Anna introduced him to her favorite local coffee shop "Silver Brew". He gave her a gift which was a collar for her cat 'Gravy' and together she and Josh took selfies which they uploaded on Instagram. Later when she returned to her salon, Anna put the collar on her cat. He was sitting at his usual spot at the front of the store as Anna talked to a client. Anna briefly left the salon to discuss the product the customer was eager to receive. She didn't notice Gravy left his spot and went outside as well.

Anna was horrified when Gravy was run over by a hit-and-run driver and her tail was severed. Two nearby pedestrians named Madge and Allegra saw what happened. They told Anna a man dressed as a pirate was responsible and offered to take her and Gravy to the hospital. When they arrived Allegra comforted Anna while Madge asked strangely personal questions from a clinic form. The doctor interrupted them and told Anna that Gravy was fine and the tail was reattached. Madge asked her about the cat collar the doctor gave her which she explained was a gift from her boyfriend. She bragged about how helpful Josh has been and mentioned he’s been picking up products for her business from Mexico.

She also revealed he had been through bad times with two crazy ex-girlfriends. One hounded him relentlessly about getting married while the other moved across the country to romantically pursue him. Anna then mentioned Josh would be upset after learning what happened to Gravy and would go after the perpetrators. She explained her salon had security cameras left over from the previous jewelry tenant ("Who's the Cool Girl Josh Is Dating?"). Anna never found out who was responsible due to the security footage being erased. She eventually moved on and sometime later was taken on a tour of her boyfriend's hometown of West Covina.

For breakfast Josh took her to an outdoor donut shop called Sugar Face and invited her to go to the local night club Spider's in the evening. He had a particular reason for her to come but wouldn't elaborate and was disappointed when Anna told him she would be busy at the salon.

Anna comes because she knows it's important to Josh. They have sex in the bathroom, but her attraction to him is dropped when she sees him male modeling. She dumps him.