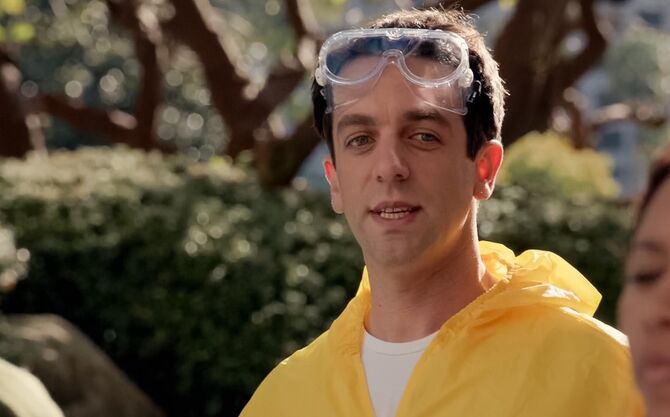 B.J. Novak Actor/comedian who owns and operates a drug factory

B.J. Novak (Benjamin Joseph Manaly Novak) is an American actor, stand-up comedian, screenwriter, author, and director. He is best known for his role as Ryan Howard on the NBC sitcom "The Office" on which he also served as a executive producer and a writer. His first appearance on "Crazy Ex-Girlfriend" was in the Season One episode "Josh and I Go to Los Angeles!". He portrays a satirical Hollywood version of himself.

In April of 2016, B.J. Novak was walking past the Los Angeles County Courthouse. He noticed that gathered there was a large group of people who were marching around the building for some reason. As he passed them he overheard his name being mentioned by the mass of people (♫ Flooded with Justice ♫). From what he heard they were complaining about Hollywood and singled him out for his Ecstasy factory. Intrigued by the weird protest he stumbled upon, B.J. joined them as they continued to walk the perimeter of the courthouse. Further ramblings of the crowd suggested they were there as part of some class action lawsuit.

For some reason everyone there blamed the city of Los Angeles for their water problems. At the head of the crowd amidst the hoopla and banner waving that was going on were a well dressed man and woman. They seemed to be leaders of the assembly who called the marching to a sudden stop when they reached the entrance to the building. After they turned to look at each other for confirmation they confidently led everyone inside of the courthouse. B.J. Novak watched on as everyone filed in ending the demonstration. With the hoopla over B.J. declared he was heading back to his Ecstasy factory ("Josh and I Go to Los Angeles!").

A year later, B.J. was contacted by Rebecca Bunch, the leader of the demonstration he witnessed outside the courthouse. She needed to borrow money to buy shares that were now available in her law firm Whitefeather & Associates. B.J. told her he wasn’t making much money as the sales of Ecstacy were not going as well as they had been years ago. He went in a rant about how customers no longer want the designer drugs he specializes in resulting in poor sales. Despite having asked for money from him Rebecca criticized B.J. for his business. She told him she expected more from him as he was a Harvard University graduate ("Oh Nathaniel, It's On!").