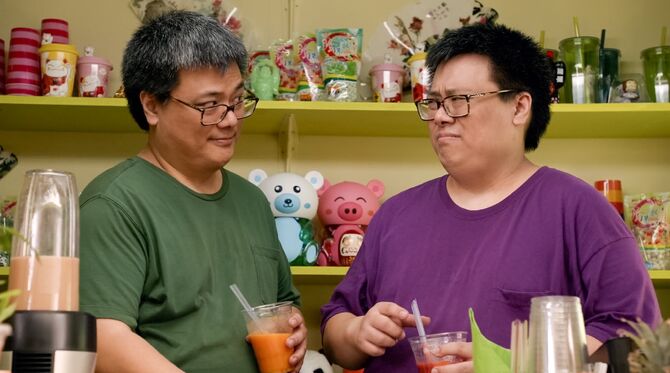 Ben and David are twin brothers who are residents of West Covina, California. Together they work at the Cup of boba kiosk which is located in Municipal Park. They are friendly and are good listeners to their patrons; in some cases with customers like Josh Chan they are even friendly with their family. Ben and David's first appearance together was on the Season One episode "My First Thanksgiving With Josh!". They are portrayed by real life twin brothers John and Matt Yuan.

In November of 2015, a few days before the Thanksgiving, Ben and David were talking to a frequent customer at Cup of boba named Rebecca Bunch. She was obsessing over something her friend Josh Chan, another regular patron, said to her. He had told her in private that he was attracted to her preceding that declaration with the use of the adverb "very". Ben and David suggested that Josh was just trying to let her down gently but Rebecca thought otherwise. David than asked her what the history was between her and Josh which led to a brief recap (♫ Crazy Ex-Girlfriend Theme Song ♫). They were further skeptical when Rebecca stated that Josh's attraction to her might mean he is now avoiding her. She even suggested that Josh got a tingle when they touch which caused Ben and David to exchange dubious looks.

Her theory was proven wrong when the topic of discussion snuck up behind Rebecca and Josh hugged her without any hesitation. Ben and David also noticed as he went on to use the word "very" several times when speaking to Rebecca. Josh explained he hadn't been seen lately because the last four days he was preparing for his family's big Thanksgiving dinner. As their customers talked Ben and David prepared a private order for Josh. They handed it to him once they were finished and David told Josh he specifically put the boba on the side for his Aunt Dory ("My First Thanksgiving With Josh!"). Months later, Ben and David were at the kiosk when Rebecca stopped by. This time she was all business and ordered a Triple Red Eye with an extra shot in the Olsen Twins size as she had no time to talk ("That Text Was Not Meant for Josh!").