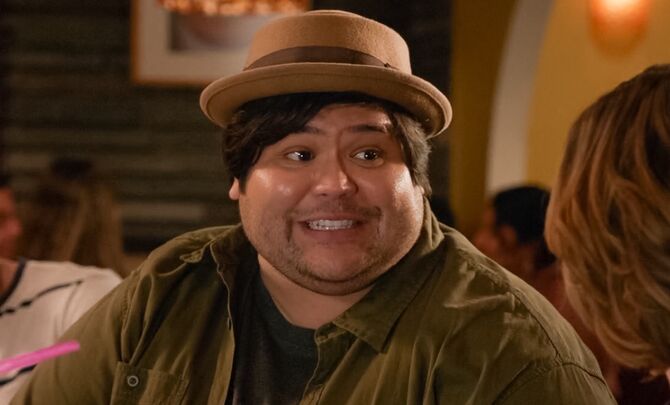 Bernard (he insists everyone call him 'Beans') is a Hispanic West Covina resident. Along with Ken he is close friends with Josh Chan and his crew. His chosen nickname comes from the fact that he organizes trade shows for thelate 90's toy craze Beanie BabyTM. His first appearance was in the Season One episode "Josh and I Work on a Case!". He is portrayed by actor Harvey Guillen.

Bernard was born and raised in West Covina, California and grew up with Josh Chan and his crew. When he grew up he became involved with the passing fad that was the stuffed animal toy craze known as "Beanie Babies". He remains dedicated to this 1990's zeitgeist into his adulthood organizing meet and greets to trade the collectibles. He also preferred that his friends call him"Beans" in honor of his hobby. In October 2015, Bernard threw a party at his house located on the 1800 block of East Merced Avenue. The party was a huge success and was so overcrowded that it spilled out into the backyard and front lawn.

He invited the crew to attend but Greg Serrano was the only one who actually showed up. Greg brought with him a date who had just moved to town, a Harvard University educated attorney named Rebecca Bunch ("Josh Just Happens to Live Here!"). Bernard would met Rebecca in person months later at the restaurant called Jalapeño Jack's. At Josh Chan's request he asked his friend Hector to get a group together to interrupt a dinner he was having with Rebecca at the fusion cuisine themed dining place. Along with another friend named Ken, Bernard was one of those Hector chose to join him and White Josh in this endeavor.

Josh pretended to be surprised by their appearance and greeted them warmly. He then asked Bernard and the others to join them and take advantage of a free drinks coupon Rebecca had received. Bernard was officially introduced to Rebecca and Josh pointed out she was at the party he threw at his house. Rebecca called him 'Bernard' but he insisted she call him 'Beans' like his friends did and assured her that the name wasn't racist. As Josh hoped, Beans and the other managed to keep Rebecca separated from him all night (♫ Group Hang ♫). When the bill came, Bernard was reluctant to pay claiming he only had the nachos ("Josh and I Work on a Case!").