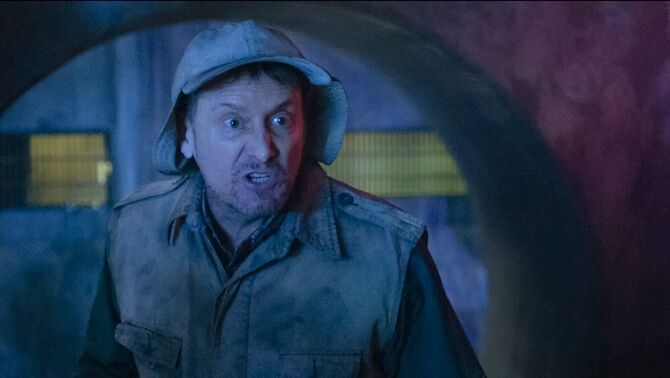 Bert Buttenweiser is an eccentric resident of West Covina who has multiple degrees including two Ph.D.'s and a B.A. in Law. He was once a conspiracy theorist and ex-utility worker for Greater City Water. Bert suspected the company of shady dealings and his investigation became the basis of a huge class action lawsuit. Although the suit was unsuccessful, it brought to light the company’s illegal activities. Bert was previously diagnosed with schizophrenia and later learned he actually had Borderline Personality Disorder. Through his fellow BPD sufferer Rebecca Bunch he became a silent partner in her law firm of Whitefeather & Associates. Eventually Bert decided to be more involved in the day to day operations of the law firm and even renamed it Mountaintop. Bert's first appearance was in the Season One episode "Josh and I Work on a Case!". He is portrayed by actor and Crazy Ex-Girlfriend writer Michael Hitchcock.

Bert was an employee of Greater City Water for fifteen years until he was unceremoniously fired. During that time he accumulated evidence of shady practices going on in the company. He learned they were syphoning water from various cities in the San Gabriel Valley and funneling it into Los Angeles. He formed a conspiracy group called the "Water Truthers" to let the public know what was going on. His campaign was largely ignored by everyone and wasn't helped by his odd personality. This changed when lawyer named Rebecca Bunch saw a manifesto he posted at Jalapeño Jack's. She got in touch with him to learn more about his theories and met up with him alongside her employer Darryl Whitefeather.

They met up with Bert wearing fly fishing gear and as he led them to the evidence he claimed proved his theories. Bert used a crowbar to pull off a manhole cover which he explained was the secret entrance which led to the water system. They followed him down into the sewer and using a flashlight he showed them the central switching station for West Covina. He pointed out how some of the pipes were being siphoned off which caused lack of water pressure. This in turn led to water heaters underperforming resulting in the cold shower epidemic Rebecca was looking into. Bert explained a significant amount of water was being diverted away from the San Gabriel Valley towards Los Angeles by Greater City Water.

The billion dollar company was in cahoots with local landlords to keep this underhanded practice going. Rebecca realized the scope of her initial lawsuit had not only gotten much bigger but also that because of this she could possibly spend more time with her client Josh Chan. Once they got out of the sewer, Rebecca and Darryl rushed off to spread the news about what they had just learned. Bert himself decided to go back into his hole and eat some rats ("Josh and I Work on a Case!"). Bert was later contacted by Rebecca's firm to present evidence and give testimony in a large class action lawsuit against Greater City Water. Rebecca even bought Bert a suit for the trail although he refused to wear undergarments.

Bert mentioned this on the stand when he went to Los Angeles for the trial much to Rebecca's annoyance. Nevertheless, Bert and his years of research on GCW's were the centerpiece of her case. He brought all of his files and turned them over to the court as exhibits 'A' through 'X'. It was then the opposing counsel Audra Levine's turn for a cross examination. She tricked Bert into admitting he had been suffering from schizophrenia for sixteen years. Everyone in court was shocked by the revelation and Audra smugly replied she had no further questions. Bert didn't realize the severe blow his admission had done to the case and sat on the stand confused at what just happened ("Josh and I Go to Los Angeles!").

Bert is portrayed by Crazy Ex-Girlfriend writer/actor Michael Hitchcock. He is perhaps best known for his part on "Glee" as Dalton Rumba. He is currently on the writing staff for Season Two of "Crazy Ex-Girlfriend".