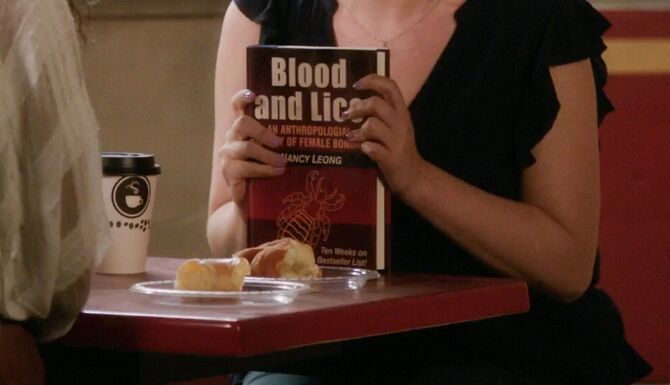 "Blood and Lice" is a popular book written by Nancy Leong which is a favorite of Rebecca Bunch. It's an anthropological study of female bonding which spent ten weeks on the bestsellers list. Rebecca hoped to use the knowledge in the book to forge a new friendship with Valencia Perez. It's first appearance was in the Season Two episode "Why Is Josh's Ex-Girlfriend Eating Carbs?".

In 2016, not long after her break up with Josh Chan, Rebecca Bunch had an unexpected reunion with his other ex-girlfriend Valencia Perez at the Sugar Face cafe. Valencia's disheveled appearance and unhealthy eating choices made Rebecca believe they should bond in order to get over thier mutual heartbreak. She was inspired to do this by a book she had read called "Blood and Lice". It was a feminist tome that detailed the history of female bonding. She told her new roommate Heather Davis about the book which suggested in prehistoric times cave women became closer by eating lice off each other. When Heather was confused Rebecca showed her the book and further elaborated on the theories in it.

Heather was skeptical because Valencia hated Rebecca due to all her past scheming involving Josh. Despite her opinion, Rebecca was sure the book described her and Valencia's situation perfectly. She mentioned "Blood and Lice" to Paula the following morning when she showed up to support her at the San Dimas College School of Law. Unfortunately Paula was just as unreceptive to the ideas the book espoused as Heather was. This was mostly because she was focused on her first day of classes. Undeterred, Rebecca went to Valencia's apartment resolved to form a relationship with her former nemesis. She even attempted to give Valencia a copy of the book but was rejected.

Later at work, Rebecca learned about her boss Darryl Whitefeather and his boyfriend Josh Wilson were going to an event called Electric Mesa. It's description as a primordial experience and getting back in touch with nature reminded Rebecca of "Blood and Lice". She decided to kidnap Valencia and take her to the festival in order to force the bonding experience. This happened accidentally at the event when both imbibed a drink laced with hallucinogens. By coincidence Josh was also at there to fix the sound system. After coming down from thier trip Valencia and Rebecca decided to get revenge on Josh. Inspired by the book, the two bonded by peeing on all his tools and equipment ("Why Is Josh's Ex-Girlfriend Eating Carbs?").