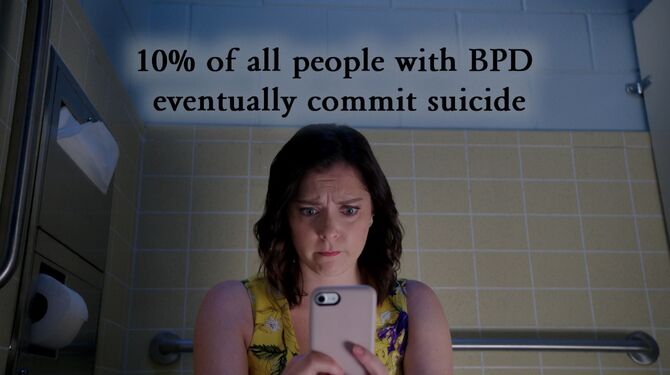 Borderline Personality Disorder (BPD) is a mental illness which manifests itself in a variety of behavioral issues. Symptoms include emotional instability, abandonment issues, feelings of emptiness and problems in relationships. These are accompanied by intense experiences of anger, depression and anxiety that can last hours or even days. On “Crazy Ex-Girlfriend” the character of Rebecca Bunch was diagnosed with this condition and is in therapy dealing with her affliction. BPD was first mentioned in the Season Three episode "Josh is Irrelevant."

(From The National Institute of Mental Health)

1. Fear of abandonment. People with BPD are often terrified of being abandoned or left alone. Even something as innocuous as a loved one getting home late from work or going away for the weekend can trigger intense fear. This leads to frantic efforts to keep the other person close. You may beg, cling, start fights, jealously track your loved one’s movements, or even physically block the other person from leaving. Unfortunately, this behavior tends to have the opposite effect—driving others away.

2. Unstable relationships. People with BPD tend to have relationships that are intense and short-lived. You may fall in love quickly, believing each new person is the one who will make you feel whole, only to be quickly disappointed. Your relationships either seem perfect or horrible, with nothing in between. Your lovers, friends, or family members may feel like they have emotional whiplash from your rapid swings between idealization and devaluation, anger, and hate.

3. Unclear or unstable self-image. When you have BPD, your sense of self is typically unstable. Sometimes you may feel good about yourself, but other times you hate yourself, or even view yourself as evil. You probably don’t have a clear idea of who you are or what you want in life. As a result, you may frequently change jobs, friends, lovers, religion, values, goals, and even sexual identity.

4. Impulsive, self-destructive behaviors. If you have BPD, you may engage in harmful, sensation-seeking behaviors, especially when you’re upset. You may impulsively spend money you can’t afford, binge eat, drive recklessly, shoplift, engage in risky sex, or overdo it with drugs or alcohol. These risky behaviors may help you feel better in the moment, but they hurt you and those around you over the long-term.

6. Extreme emotional swings. Unstable emotions and moods are common with BPD. One moment, you may feel happy, and the next, despondent. Little things that other people brush off can send you into an emotional tailspin. These mood swings are intense, but they tend to pass fairly quickly (unlike the emotional swings of depression or bipolar disorder), usually lasting just a few minutes or hours.

7. Chronic feelings of emptiness. People with BPD often talk about feeling empty, as if there’s a hole or a void inside them. At the extreme, you may feel as if you’re “nothing” or “nobody.” This feeling is uncomfortable, so you may try to fill the hole with things like drugs, food, or sex. But nothing feels truly satisfying.

8. Explosive anger. If you have BPD, you may struggle with intense anger and a short temper. You may also have trouble controlling yourself once the fuse is lit—yelling, throwing things, or becoming completely consumed by rage. It’s important to note that this anger isn’t always directed outwards. You may spend a lot of time being angry at yourself.

9. Feeling suspicious or out of touch with reality. People with BPD often struggle with paranoia or suspicious thoughts about others’ motives. When under stress, you may even lose touch with reality—an experience known as dissociation. You may feel foggy, spaced out, or as if you’re outside your own body.