Crazy Ex-Girlfriend Wiki
Register
Don't have an account?
Sign In
Advertisement
in: Characters, Season One Characters, Brody,
and 3 more 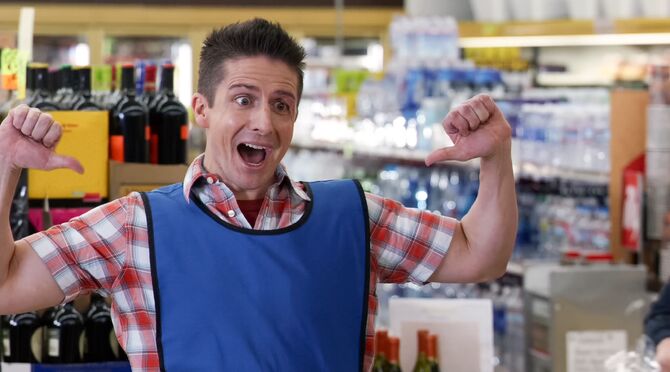 Brody (aka 'Grocery Clerk with half an eyelid') is an employee at the local grocery store Country Market in West Covina, California. Despite his accidentally self-inflicted deformity he is not shy and has a very confident personality. He attended a housewarming party at Rebecca Bunch's residence and later shown to be a rival to his fellow grocery clerk worker Marty for a female employee at the store named Ally. His first appearance was in the Season One episode "I Hope Josh Comes to My Party!". He is portrayed by Benjamin Seimon.

In October 2015, Brody got personally invited to Rebecca Bunch's housewarming party (♫ I Have Friends ♫). He showed up early to her apartment for the event and brought with him some celery stalks as a present. He was dissapointed when he saw the house wasn't actually on fire as the flyer he recieved had suggested. The party itself started off badly as only a few other people showed up including Rebecca's boss Darryl Whitefeather. Brody explained to Darryl that his left eyelid was not a congenital condition but the result of him using a gas burner to light a cigarette. Thier conversation was interrupted when the host tried to get everyone to starts dancing by the windows.

Later, Brody teased Darryl as he unsuccessfully tried to strike down a Valentine's piñata in the backyard while Heather Davis recorded them. All the attendees were then gathered together by another guest Josh Chan. He had Brody put on a pair of sunglasses while he arranged them for a selfie pic. Once he posted the photo on his social media accounts it seemed to have the desired effect. A group of people immediately showed up and the party came to life. Afterwards, Brody thanked 'Betsy' for inviting him and told her he'd see her at the grocery store. Rebecca corrected him and told Brody her actual name but he walked off and replied that he didn't care ("I Hope Josh Comes to My Party!").

Months later, Brody flirted with an employee at the store named Ally. He had some competition for Ally's affection in another grocery clerk named Marty. One day Marty decided to publicly serenade Ally on the stores speaker system with a song. Noticing Ally's positive reaction, Brody upstaged Marty's performance by doing cartwheels. Ally was delighted by his antics and agreed to go on a date with Brody. That night Brody took her to a hot dog stand for dinner and stopped being subtle. He called her by the wrong name and asked her when they were going to have sex. Ally walked out on him upon realizing she made another in a series of bad life choices. Brody was unfazed by this believing she'd be back since, according to him, they always come back ("Josh's Sister is Getting Married!").