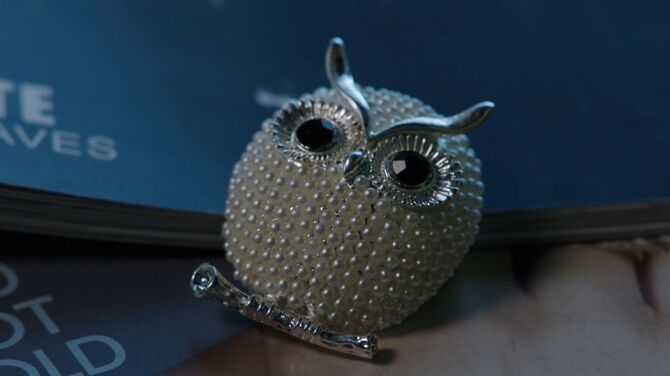 The brooch was a hidden surveillance device in the shape of an owl. Paula Proctor gave it to Rebecca Bunch so she could remotely observe her attending Thanksgiving dinner with Josh Chan's family. The device transmitted the event as it happened and Paula witnessed the highs and the lows Rebecca experienced that day. The device was first seen in the Season One episode "I'm So Happy That Josh Is So Happy!".

At the end of November in 2015, Paula Proctor managed to manipulate events so that Rebecca Bunch could get invited to the Chan family Thanksgiving dinner. Josh's girlfriend at the time Valencia was also going but was so disliked by the family. Paula believed Rebecca could show up as a more acceptable alternative. Wanting to see Rebecca's 'triumph' live, Paula got a miniature camera the law firm used in a divorce case. It was in a brooch shaped like a bejeweled owl and could transmit a signal to an app Paula had on her phone. She gave the device to Rebecca at her apartment before she left for the Chan's house with dinuguan she cooked for the festivities.

On her phone, Paula watched Rebecca charm the Chan's while hosting her own Thanksgiving dinner with the Proctor family. She also witnessed Valencia confront Rebecca who warned her to back off from Josh. Things started to go south when Rebecca got diarrhea as she was unused to the Filipino food that was being served. She went to relieve herself but before she could use the toilet she heard Valencia and Josh had entered the bedroom connected to the bathroom she was in. They were arguing about Rebecca's presence at the dinner and things between them got heated. Paula even heard them yelling at each other over the brooch's receiver and was happy that her plan was working better than she expected.

However, things took a turn when the argument Josh and Valencia were having turned into passionate love making. Rebecca was forced to wait until they were finished while nursing an upset stomach. Once it was over, Rebecca rushed home and made it just in time to use her toilet with Paula watching over the live feed from the brooch. Later, Rebecca was recovering from her gastric problem on the couch while looking at the brooch. After she set it down on her coffee table Greg walked into the apartment. He was making good on a promise she made him earlier that they'd share a drink. Paula was upset when she observed through the brooch that Rebecca and Greg seemed to be getting closer ("My First Thanksgiving With Josh!").

Over a year later, Rebecca was blackmailed by her fellow Harvard University alum and former lover Trent Maddock into being his girlfriend. He discovered in a drug induced haze she tried to hire a hit man to kill her ex-boyfriend Nathaniel’s current girlfriend Mona. Rebecca told Paula she needed to find something equally scandalous on Trent to use against him. Paula was reluctant as she didn’t want to do those sort of capers anymore. Rebecca convinced her by lying that Trent had dirt on her too regarding all the illegal things she did to help her win Josh’s love. Paula reluctantly agreed to help (♫ Back In Action ♫) and rummaged through her desk drawers for equipment where she found the owl brooch ("Trent?!").