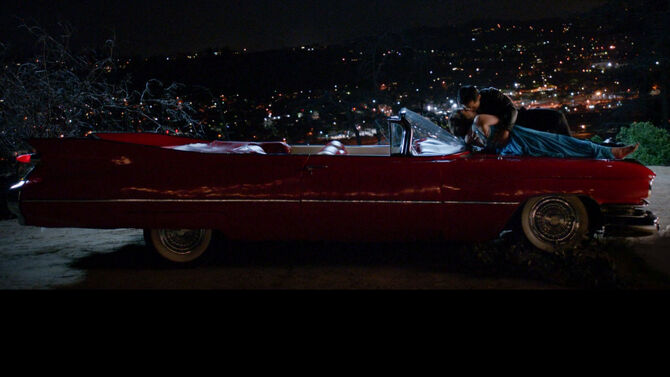 The Cadillac was an automobile rental meant to transport newlyweds Jayma and Phillip after thier wedding reception. However, it was commandeered by Jayma's younger brother Josh Chan. He took it so he could drive Rebecca Bunch to a secluded hill top and confess his feelings for her. The car was first seen in the Season One episode "Paula Needs to Get Over Josh!".

In 2015 at Jayma's wedding reception, her brother Josh texted Rebecca Bunch to meet him at the hotel's lobby. When they meet up he and Rebecca take the red Cadillac his sister had rented for the wedding. They drove to a secluded hillside where they climbed onto the hood of the car to talk. Josh confessed his strong attraction to Rebecca and showed her the love letter she gave him which he always kept close. Rebecca accepted his feelings and the two had sex in the Cadillac. Afterwards as they snuggled in the back seat of the Cadillac, Rebecca confessed to Josh she moved to West Covina just for him ("Paula Needs to Get Over Josh!").

Josh and Rebecca were driving back in the Cadillac from after thier hillside tryst in total silence. Josh's reaction to her confession made Rebecca realize she made a mistake telling him the truth. Josh finally spoke up as he drove and asked Rebecca to clarify what she said. Rebecca then began lawyering her way out of the situation and convinced Josh he was the one obsessed with her instead of the other way around. She at first demanded to be taken home and then asked if they could get something to eat. As the confused Josh continued to drive them in the Cadillac he wound up apologizing for his actions ("Where Is Josh's Friend?").