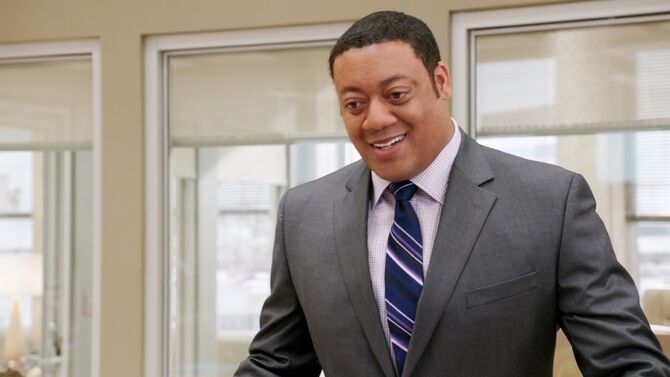 Calvin Young is a wealthy businessman and a client of Whitefeather & Associates. He was born in Prescott, Arizona and moved to Tucson where he met his wife. He was happily married for ten years until her death after a brief illness. He hired the law firm to help him acquire industrial acreage for his varied business interests. While he was there Calvin briefly romanced the head paralegal Paula Proctor. His first appearance as in the Season One episode "I'm So Happy That Josh Is So Happy!". He is portrayed by actor/comedian "Cedric Yarbrough.

Calvin Young was looking for a law firm in West Covina, California to represent him in his business ventures. One potential candidate he set up an appointment with was called Whitefeather & Associates. They had prepared an itinerary to sell him on their services which included a presentation and dinner. When he arrived to hear their proposal a paralegal by the name of Paula Proctor caught his eye. After flirting with her for a bit he was led to the firm's conference room by founder Darryl Whitefeather. He met a few of the associates including the office closer Rebecca Bunch who was to lead the pitch.

Unfortunately Rebecca was not prepared properly and the presentation was postponed. The dinner went on as scheduled and was held at Paula's home. Calvin spent the entire night flirting with Paula and ignoring Darryl who was also there. He asked Paula out on a date and took her to local jazz club called "Smoky Jazzz". Calvin tipped a customer who didn't actually work at the establishment to seat him and Paula. He continued to impress her with his knowledge of jazz and telling tall tales of his world travels. After they watched a live performance Calvin invited Paula back to his hotel room not wanting the night to end.

They went back to his hotel room where Calvin announced his amorous intentions to Paula (♫ The Sexy Gonna Do It Song ♫). Before anything could happen Rebecca Bunch and her neighbor Heather Davis burst into the room. Rebecca pleaded with Paula not to add another complication to her real problem, her marriage to her husband Scott. Calvin took Rebecca's words to heart remembering the love he had for his dead wife. The three of them had hugged it out as Heather watched from the sidelines entertained. Afterwards, Calvin urged Paula to fight for her marriage and told Rebecca he was so impressed with her actions that he decided to officially become a client of the firm ("I'm So Happy That Josh Is So Happy!").

Sometime later, Calvin called Rebecca about a deadline for a property he was interested in. They met up at a restaurant to discuss the matter and she brought along her mother Naomi. While he and Rebecca ironed out the details of the land deal Naomi was aggressively flirting with him. He excused himself from the table to take a phone call and once he was finished Rebecca approached him. She explained she needed him to sleep with her mother in order to finally recieve a prized family heirloom. Calvin sympathized with her situation as he considered himself a 'mom pleaser' too but he vehemently declined and quickly rushed out of the restaurant ("My Mom, Greg's Mom and Josh's Sweet Dance Moves!").

He was mentioned later by Paula as an example of a man whom Paula liked for a short time regarding Rebecca's situation with Nathaniel. ("Josh Is the Man Of My Dreams, Right?").