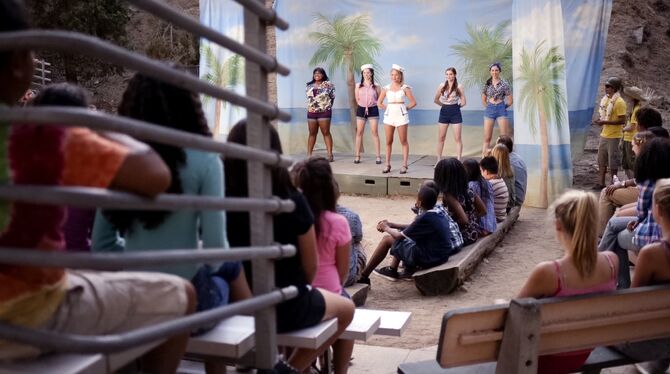 Camp Canyon Grove was a summer musical camp for kids which specialized in theatrical performance. Years ago when they were teenagers Rebecca Bunch and Josh Chan both attended the camp. The two dated until camp was over and Josh broke up with her. The brief relationship formed at camp would eventually have significant repercussions on both thier lives a decade later. The camps first appearance was in the Season One episode "Josh Just Happens to Live Here!".

In 2005, a sixteen year old Rebecca Bunch and a teenaged Josh Chan spent thier summer at Camp Canyon Grove. Rebecca's mother Naomi Bunch had wanted her daughter to attend mock trials to get her ready for Pre-law. However, Rebecca got her father to convince her mom to let her go to music camp. While she was there Rebecca dated Josh and the two became lovers. Unbeknownst to Rebecca, Josh at the time was on a break from his high school sweetheart Valencia Perez. On the very last day of camp, Rebecca performed background vocals on the song "I'm in Love with a Wonderful Guy" for a musical production of "South Pacific". Afterwards Rebecca and Josh walked together towards the parking lot where their parents were to pick them up.

Rebecca gushed about thier time together at camp which seemed to make Josh uncomfortable. She ignored her mother who had just arrived and was honking for her in her car. Rebecca instead focused on Josh and discussed keeping the relationship going long distance but he cut her off. Josh explained that he was going to be too busy with various school commitments to stay in contact with her. Josh broke up with her feeling it wouldn't work since she was so dramatic and weird. Rebecca was stunned by his declaration and told Josh she loved him. However, he could only respond with a curt thank you before rushing off to reunite with his parents. Rebecca finally got into her mothers car and got a lecture about avoiding teenage pregnancy ("Josh Just Happens to Live Here!")