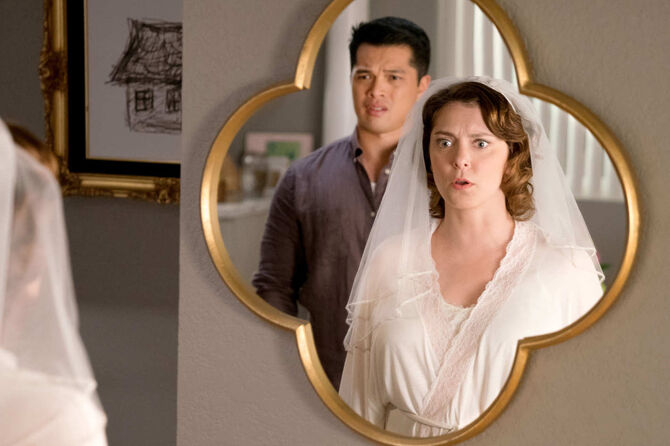 Can Josh Take A Leap Of Faith?

At home, Rebecca texts her father hoping to meet privately with Silas before her wedding to Josh. Paula arrives with a veil she made and the two celebrate Rebecca's upcoming nuptials (♫ What A Rush To Be A Bride ♫). Afterwards, Rebecca tells Josh how excited she is to have her father here and isn't even upset when Silas texts her back to turn down her invitation. Rebecca dons the veil and looks into a mirror triggering a memory from seven years ago. Lost in her reverie she calls Josh "Robert" and when he asks Rebecca about it she claims it's the name of a new client. Josh goes on to Home Base to attend his stag party with Darryl, Father Brah, WhiJo and Hector. He is bothered when Darryl reveals Rebecca lied to him; Darryl himself becomes upset upon learning WhiJo doesn't believe in the institution of marriage.

Later, Josh asks Father Brah if he had any doubts about becoming a priest. Brah says he never questioned it once he arrived at the seminary and felt at peace. That night at the rehearsal dinner, Valencia in her role as wedding planner coordinates the event and greets guests. Paula warns Rebecca to lower the expectations she has for her father. Rebecca doesn't listen and makes an embaressing scene when Silas arrives. She introduces him to Josh and Silas also has an uncomfortable reunion with Naomi. Rebecca is ecstatic when Silas agrees to her request for a father/daughter dance at the wedding reception. Nathaniel unexpectedly shows up but Rebecca ignores him when she notices her fiancée and father talking. Josh asks Silas about Robert and he recalls that was someone involved with Rebecca having to leave Harvard.

The next day at basketball practice, Josh confides in Sara his worries about Rebecca. In a dance studio, Rebecca and her father rehearse for the wedding. As they dance, memories of Silas' neglectful treatment of Rebecca leads to an awkward moment when he asks to borrow money. She goes to a sympathetic Dr. Akopian who suggests Silas may be the root of Rebecca's psychological issues. Akopian is concerned when her patient has a dissociative episode and says 'Robert' once more. Rebecca suddenly panics about her father leaving and goes to his hotel to give him a check. Meanwhile, Naomi tells Josh to drop the subject when he asks about Robert. Across the country in Massachusetts, Trent Maddock bribes a state official for a file on Rebecca to find something to break up her and Josh.

The next morning at Rebecca's house, Valencia and Heather leave with the bride for the wedding venue. Josh lingers and wrestles with his doubts about Rebecca. He is eventually joined by Father Brah who advises he just talk to Rebecca. At the venue, Rebecca reflects on how her dreams are coming true (♫ Rebecca's Reprise ♫). Back at her home, Trent catches Josh before he leaves and gives him a file possibly containing Rebecca's secret. Josh rushes over to see Sara but realizes he's falling into his pattern of hooking up with the next available pretty woman to solve his problems. At the wedding, Paula and Rebecca reminisce as the guests mingle outside. Amongst them are WhiJo and Darryl who put aside their disagreement about marriage to help Madison prepare for her role as a flower girl.

Heather's conversation with Hector and his mom is interrupted when Valencia asks her to confirm Josh's arrival. At the entrance, Heather observes Josh pull up in his SUV only to drive off. While Josh eventually stops to think things over, Heather and Valencia tell Rebecca and Paula what just happened. As the guests wait for the ceremony to start WhiJo is surprised by Darryl. He now wants them to have a baby after seeing how well Wilson gets along with Madison. Meanwhile, Father Brah updates Rebecca on Josh's whereabouts. Josh is now at the seminary having decided to become a priest. In reaction Rebecca runs outside past the guests stopping at the edge of a cliff near the venue. Paula, Heather and Valencia follow trying to calm Rebecca down as she has another flashback of Robert.

He was a married Harvard professor she had an affair with who ended the tryst and broke her heart. She accidentally set his house on fire and was forced to leave school and get psychiatric help at a mental institution. Rebecca faints after remembering all of this and is caught by Paula. As Rebecca blames herself for all her broken relationships Paula assures her it was the men's fault not hers. She stokes Rebecca's fury by telling her she should blame the first man to leave her: Silas. Backed up by her friends, Rebecca tells her father to go and that she never wants to see him again. Once he departs, Paula tells Rebecca that they will make Josh pay for what he did. Rebecca calmly states that Josh Chan must be destroyed and smiles when Paula asks what she has in mind.

Retrieved from "https://cxg.fandom.com/wiki/Can_Josh_Take_A_Leap_Of_Faith%3F?oldid=18770"
Community content is available under CC-BY-SA unless otherwise noted.