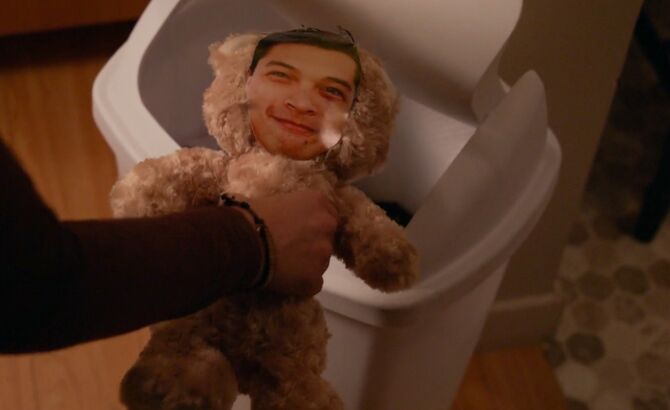 Channy Bear was a plush teddy bear once owned by Rebecca Bunch which had a picture of Josh Chan taped on to the face. She tried several times to get rid of it but was unable to until Josh broke up with her a second time. It was then she finally destroyed it by setting it on fire along with a few other items related to Josh. It's first appearance was in the Season One episode "Josh's Sister is Getting Married!".

In March of 2016, Rebecca Bunch had an epiphany about her obsession with Josh Chan and attempted to move on. She decided to get rid of all the items she had created or bought related to her former object of affection. One of those prized possessions was the Channy Bear teddy bear which had a photo of Josh's face attached. Initially Paula convinced her to keep it but Rebecca ended up changing her mind after reconsidering Greg as a romantic option. She apologized to the bear before she threw it into the garbage can and went to go see Greg at Home Base ("Josh's Sister is Getting Married!").

Not long after throwing Channy Bear in the garbage Rebecca retrieved it. Sometime later she was rejected by not only Josh but Greg as well. Bitter over both break ups, Rebecca gathered anything related to both men to erase any trace of them. Channy Bear was one of those things and got thrown into the kitchen sink. Rebecca poured wine over everything and then dropped a match into the sink. Channy Bear and the other items then burst into flames. The fire quickly got out of control and Rebecca was forced to dial 911. Her embarrassing frantic phone call was later uploaded as a YouTube video ("When Will Josh and His Friend Leave Me Alone?").