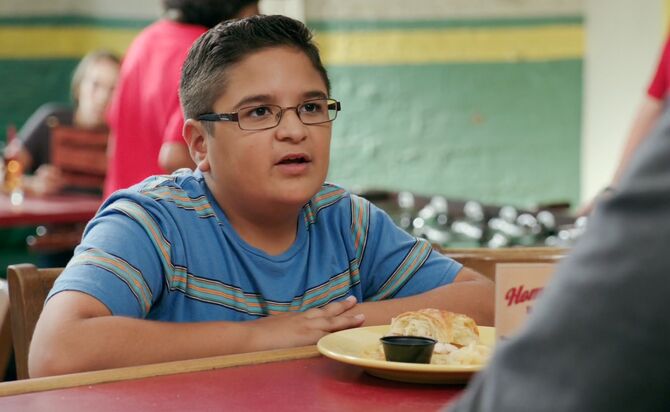 Chris Regular customer at Home Base

Chris is a child living in West Covina, California who is a frequent patron of Home Base. He is friends with bartender Greg Serrano who is amused by his precocious observations. The two made a pact about respective women they were interested in and Chris pushed for Greg to hold up his end of the bargain. His first appearance was in the Season One episode "I Hope Josh Comes to My Party!". He is portrayed by actor Jacob Guenther.

In West Covina, California on October 26, 2015, Chris was about to leave Home Base when he ran into Rebecca Bunch on his way out. She asked him a question but he didn't hear her as he was distracted by her low cut low cut t-shirt which showed off a lot of cleavage. Rebecca bent forward to repeat her question inadvertently giving Chris a better look. She asked him again if he had seen Josh Chan and Chris replied that he hadn't. Before he left Chris told Rebecca he thought she looked sweet. Rebecca was flattered unaware his compliment was directed more at her décolletage than her overall appearance ("I Hope Josh Comes to My Party!").

Sometime later, Chris was at Home Base demanding Greg go through with a deal they made. He agreed to ask out his classmate Olivia if Greg asked Rebecca out too. As they were talking Josh Chan entered in low spirits since he needed to find a job soon. Greg suggested he go to his "happy place" which Chris mistook to mean drugs. Chris cautioned them against using since one time his cousin tried bath salts and ate her own lips. When Rebbecca entered the establishment and declared that she was trying to make healthier choices, Chris again encouraged Greg to ask her out which he finally did ("I'm Going on a Date with Josh's Friend!").

Right before Thanksgiving, Chris was again at Home Base discussing with Rebecca how his family has tamales for the holiday. Chris was confused when Greg jokingly suggested that for the first Thanksgiving the Pilgrims and Indians had Buffalo and prosciutto. Valencia interrupted the conversation as she was there to pick up her sister Elena from softball. When Valencia intentionally ignored Rebecca, Greg brought up that this time of year she is in a bad mood since she goes with Josh to his family's for Thanksgiving. Chris explained that the Chan's don't like Valencia and that when Josh and her go they nearly break up every time ("My First Thanksgiving With Josh!").

The following year, Chris is at Home Base and is concerned about Greg's break up with his co-worker Heather Davis. He warns Greg that things between he and his ex-girlfriend has the potential to create an awkward work environment. Chris worries that a huge blow up will eventually occur. Greg is dismissive of Chris's notion until he witnesses Heather acting even more lethargic and listless at work. When Greg confronts her about it she is furious at his obliviousness of her broken heart because of his actions and storms off. Chris witnessed the exchange and silently reprimanded Greg with raised eyebrows smug about his correct assessment of the situation ("Josh is Going to Hawaii!").

In October 2016, Chris was confronted at Home Base by Rebecca who wanted information about Greg's whereabouts. He had gone missing for the last month and Rebecca was going down the list of all his friends, including Chris, trying to find him. When Chris replied he didn't know where Greg was Rebecca thought he was lying and threatened him with physical violence. Chris then revealed that he recorded all his conversations with adults on his cell phone. He told Rebecca he did this to protect himself on occasions just like this. Rebecca complimented him on his foresight and backed off. While Chris went about his business Rebecca talked to Greg's boss Kevin and his ex-girlfriend Heather ("Where Is Josh's Friend?").

Some time later, Chris' mom drove him to the L.A. international airport so he could say goodbye to Greg Serrano. His friend was moving to Atlanta to attend Emory University. Joining Chris was Greg's friends Josh Wilson, Hector and Josh Chan. They were lined up across from Greg and awkwardly stared at him. After Greg explained the sudden nature of his leaving Chris spoke up. He mentioned Guardrail and him had been talking and felt his new sponsor in Atlanta Barry would be a good fit for Greg. Chris then said he had to go since his mom was parked in the red zone. Before he left, they performed an elaborate handshake and Chris thanked Greg for being his weirdly older friend ("All Signs Point to Josh...Or is it Josh's Friend?").

Chris is at Home Base with Hector, WhiJo and Kevin when Josh returns after briefly attending the seminary to try and become a priest. This failed enterprise was right after his aborted wedding to Rebecca in which he left her at the altar. Chris and evereyone else at the bar had just read an article portraying Josh as a racist, homophobic and toxic boyfriend. They all believed it was true and Chris mentioned he always knew Josh let him win at pinball. Josh protested his innocence pointing out the source of the interview was Rebecca but no one believed him. Kevin then told him to leave the bar so they could enjoy happy hour ("Josh Is a Liar.")

“At least I had the guts to ask her out. What's your deal with Rebecca? Either do it or don't do it.”— Chris
“Man, you're like a broken record.”— Greg
“Dude, I don't even know what a record is.”— Chris
“You don't understand. you're too young. I like Rebecca but I don't...like Rebecca. I have very positive feelings of attraction towards her but i also kinda wanna...punch her in the arm.”— Greg
“You just described fifth grade.”— Chris

Retrieved from "https://cxg.fandom.com/wiki/Chris?oldid=17696"
Community content is available under CC-BY-SA unless otherwise noted.