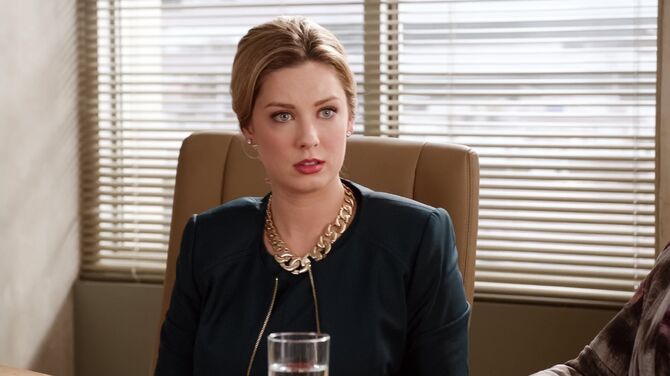 Connie Cavanagh is a lawyer from West Covina, California. While representing a client at her former mentor Paula Proctor's law firm she became embroiled in romantic drama involving her opposing counsel Rebecca Bunch. Her first appearance was in the Season One episode "That Text Was Not Meant for Josh!". She is portrayed by actress Briga Heelan.

In February 2016, Connie Cavanagh was at a pre-trial conference at the law firm of Whitefeather & Associates. Connie was there representing her client regarding a contract violation a tenant she had was suing her over. On the opposing counsel was the star attorney of the firm Rebecca Bunch and Connie's former mentor head paralegal Paula Proctor. The meeting was being presided over by Judge Harry Spenser who asked Connie to begin her arguments after Rebecca was done with hers. Once her presentation was over Judge Spenser asked Rebecca if she had any rebuttals. Her opponent was distracted and did not immediately respond claiming she had to examine a crucial piece of evidence.

After looking at her phone, Rebecca asked for the judge for a temporary stay which Connie complained was highly unprofessional. Paula then explained the situation to everyone: Rebecca had moved to West Covina because she's secretly in love with her ex-boyfriend, who is in a committed relationship, and just accidentally sent him a text declaring she was still in love with him. Upon seeing the text on her phone, Judge Spenser gave Rebecca the rest of the day to take care of her mistake. Judge Harry showed Connie the text and she and her client wanted to help as well. Connie quickly shot down Harry's idea that they spin the text was part of 'Opposite day' as she felt no one actually did that anymore.

Connie suggested that Rebecca basically go into witness protection and leave everything behind. Her idea was rejected too and Paula suggested that they could get to Josh's phone before he sees it. Rebecca then remembered that Josh had left his phone at his apartment. Connie and the others encouraged Rebecca to quickly go and delete the incriminating text. Unfortunately Paula was unable to help Rebecca as she had a dinner date with her husband. Connie joined the others to cheer on Rebecca as she rushed out of the building. While on the way to the apartment Rebecca imagined Connie, the litigants and Judge Harry as a 1980's hair band chronicling her efforts through song (♫ Textmergency ♫).