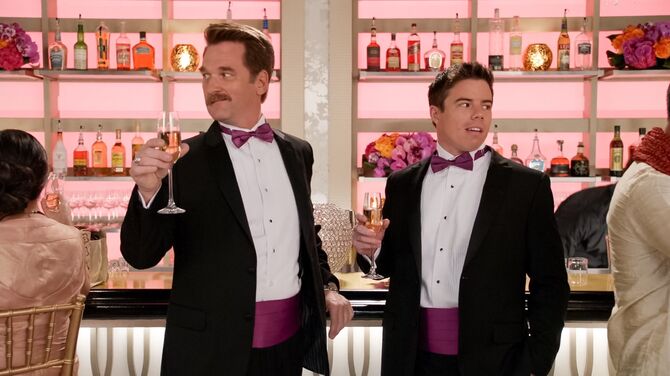 Darryl and White Josh were first formally introduced to each other by mutual acquaintances and hit it off immediately. Darryl Whitefeather knew his future boyfriend beforehand as he went to a gym where "White" Josh Wilson worked. After Wilson helped Darryl realize his bisexuality they started seeing more of each before becoming an official couple. Although they were happy for a time they broke up as they were unable to agree on having children together. Their first appearance was in the Season One episode "I'm Going to the Beach with Josh and His Friends!". They are portrayed by actors Pete Gardner as Darryl Whitefeather and David Hull as White Josh.

After attending his friend Josh Chan’s disastrous nuptials, WhiJo goes on to create an ant based energy bar. He is surprised when Darryl manages to successfully promote it which causes WhiJo to reconsider his negative stance on adopting a baby. Weeks later after Darryl participates in an intervention for Rebecca she lashes out at her boss by telling him WhiJo clearly does not want to be a parent. Darryl gets WhiJo to finally admit this which caused a lot of tension between them. Together they tried to get past this issue by spending time together in a yurt. However, this vacation ended when Darryl left after finding out about Rebecca’s suicide attempt. Once the crisis passed Darryl and WhiJo settled into an uncomfortable impasse in their relationship. Darryl’s daughter Madison took it upon herself to resolve the situation by getting both of them to admit they needed to break up. In the aftermath they both attempted to move on: Darryl devoted all his attention into getting another child while WhiJo found solace through an unlikely friendship with Nathaniel. Once Darryl got his sperm tested and found it it was healthy Rebecca agreed to donate an egg while Heather volunteered to be a surrogate. Meanwhile, WhiJo spent a few months out of town to get over Darryl and returned with a new dog. When Heather had the baby WhiJo visited Darryl at the hospital and congratulated him on his new child.