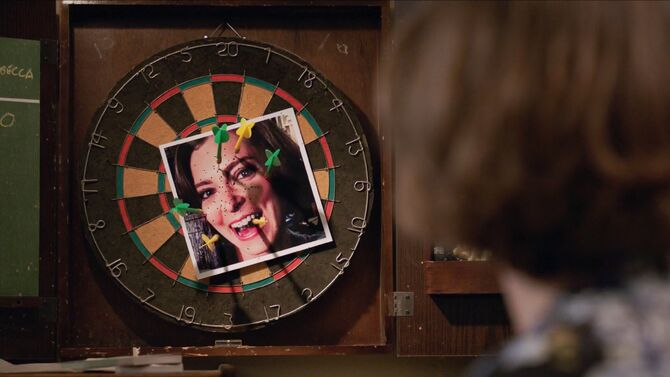 Dart board Standard bar game
Owned by: Unknown — First Appearance: ""Josh and I Are Good People!""

The dart board is a classic recreational game that involves throwing darts at a circular target hanging on the wall. The target is divided into sections with numerical points; the outer sections if hit by a dart give the players the least amount points while the inner sections give higher points. The most points you can score in a single throw is by hitting the center of the target which is called a "bullseye". A dart board is hung in the back room of the West Covina bar Home Base. It's first appearance was in the Season One episode "Josh and I Are Good People!"

In October 2015, Greg Serrano was working at the Home Base still upset about a horrible date he had with Rebecca Bunch. In the back room he placed a photo of her on a dart board and launched missiles at the target. Rebecca went to the bar to show Greg she was a good person after he insulted her earlier. To prove it she told him she was working on Darryl's daughter's custody case. He was wasn't impressed and suck out of the bar once his shift was over. A waitress told Rebecca this and also recognized her from the picture on the dart board. The next time Rebecca was at Home Base she followed Greg to the back room and saw the dart board. She was impressed by his marksmanship and the implied hatred he had of her ("Josh and I Are Good People!").

Months later, Greg ended a relationship he was having with Heather Davis who was now his co-worker at Home Base. Just as Greg had done earlier she was using the dart board to channel her anger. Greg went to talk to Heather but was wary when she mentioned she wanted to throw one of the darts into his eye ("Josh is Going to Hawaii!"). Not long afterwards, Greg entered into a "friends-with-benefits" relationship with Rebecca and was uncharacteristically in good spirits. Hector figured out the source of Greg's happiness when he saw him and Rebecca flirting. He followed Greg to the bar's store room where the dart board was still hanging and congratulated his friend ("Josh's Sister is Getting Married!").