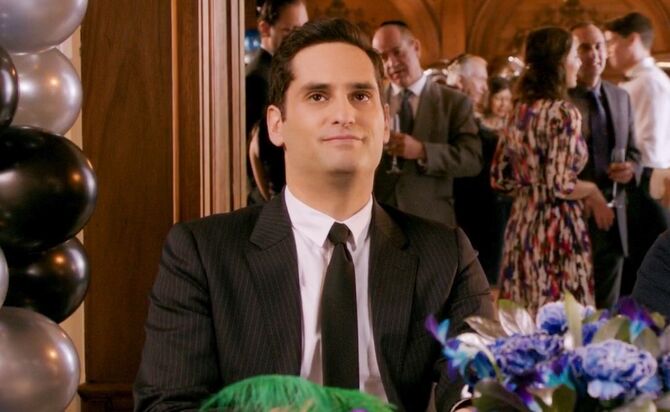 David is a Hedge fund manager and husband of Audra Levine. He once had a brief tryst with Rebecca Bunch who is his wife’s oldest friend and rival. David is also a huge Dave Mathews Band fan and is insecure about his sexual prowess. He was first mentioned in the Season One Episode “I'm Going on a Date with Josh's Friend!” and his first onscreen appearance was in the Season Two episode “Will Scarsdale Like Josh's Shayna Punim?.” He is portrayed by Doug Mand.

In 2015, David was a New York hedge fund manager and got married to his girlfriend Audra Levine ("I'm Going on a Date with Josh's Friend!"). His fiancée was an attorney who got a big promotion at her law firm. With all their success they decided to buy a country house upstate ("My Mom, Greg's Mom and Josh's Sweet Dance Moves!"). Audra had a bitter rivalry with a mutual acquaintance of theirs named Rebecca Bunch. David met Rebecca when he was in college and they attended the annual Matzo Ball over Winter holiday. They had sex in a bathroom stall, an experience Rebecca would later mock over his poor performance and penis size. His wife Audra flew to Los Angeles to defend the conglomerate Greater City Water against a class action lawsuit filed by Rebecca ("Josh and I Go to Los Angeles!").

Months later, David and his wife Audra were invited to a Bar Mitzvah for a teenager of a family at their temple. His name was Skyler who was the cousin of Rebecca Bunch. Once the ceremony was over, David and Audra attended the after party where they ran into Rebecca who was there with her boyfriend Josh Chan. After Rebecca mocked her brief tryst with David, he and Josh left to let Audra and Rebecca catch up. He and Josh bonded over their mutual love of the Dave Mathews Band and performed air guitar at one of the activitiy kiosks. Later, David and Josh tried to find more common ground which was difficult since Josh hadn’t been around too many Jewish people ("Will Scarsdale Like Josh's Shayna Punim?")

Sometime later, David was contacted by Rebecca Bunch about a business proposition. She needed to borrow money in order to buy shares in her law firm Whitefeather & Associates. Rebecca talked to him online through video messaging and reminded she and Audra were friends and that they themselves had that brief moment together. She figured since he bragged about how rich he was he could easily lend her the cash. David told her he had a lot of money because he specifically didn’t give out funds to bad investments like her. He added that he’d like it if she would stop telling people how bad a lay he was and that his penis size is sufficient. Rebecca responded by saying he must be very proud ("Oh Nathaniel, It's On!").

The following year David and Audra decide to move to a bigger apartment after learning she was pregnant with triplets. Late in her third trimester, Audra mentions this to Rebecca when her rival returns to Scarsdale to visit her mother Naomi ("I Will Help You"). Once the babies are born, David and Audra hire three different nannies to take care of them. Unfortunately, the stress of having three kids along with her high pressure job took its toll on Audra. David is concerned when she doesn't return from a trip to Las Vegas to attend a friends engagement party. He learns she doesn’t plan on coming back and was inspired by Rebecca to leave her old life behind and start fresh on the West Coast.

David then froze her accounts but despite not having anymore money she still remained in Nevada. In a desperation he contacted Rebecca who lived nearby in West Covina, California. He told her the situation and chastised her when he saw how amused she was that her frenemy was doing exactly what she did years ago. David pleaded with Rebecca to find his wife and convince her to come home. She reluctantly agreed and David gave her the location of the casino Audra was staying at. Along with her friends Rebecca found Audra and helped resolve a messy situation she got into. She also got David's wife to give up on starting a new life in Vegas and return to her family ("I Need to Find My Frenemy").