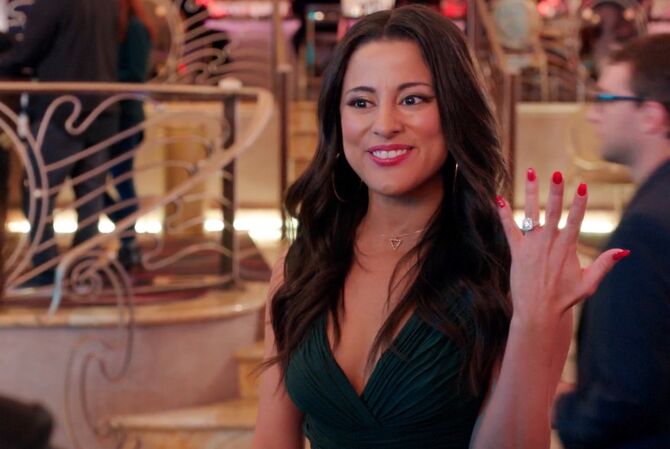 Denise Martinez is a West Covina native who was once a classmates of Valencia Perez. They both attended Pizarro Hills High School and to this day still have any underlying antagonistic rivalry with each other. Her first appearance was in the Season One episode "I'm Going to the Beach with Josh and His Friends!." She is portrayed by actress Carmela Zumbado.

In 2015, Valencia Perez was still dating Josh Chan and invited his ex-girlfriend Rebecca Bunch to a beach trip they and their friends were having. Afterwards when asked why she did this Valencia replied that women have to help each other. She then imagined a musical performance which included several women Valencia knew in her life (♫ Women Gotta Stick Together ♫). This included her rival from high school Denise Martinez who Valencia confessed she could not stand. Denise was not aware of the statement unlike most of the other women who Valencia outright insulted. Denise was amongst the throng of women who were inexplicably cheering on Valencia as she finished her performance ("I'm Going to the Beach with Josh and His Friends!")

Four years later, the real Denise Martinez was in Las Vegas celebrating her recent engagement with a bachelorette party at the Majestros Casino. It's there she ran into Valencia Perez who was with her own friends. Denise went over to say hello and they greeted each other civilly despite their obvious mutual disdain. When Valencia asked why she was in Vegas Denise happily let her know she was currently engaged. She showed off the ring and explained the ultimatum she gave her her boyfriend which led to this. Valencia was both furious and jealous since unbeknownst to Denise a similar choice she gave to her current girlfriend didn't work out as well. Denise then abruptly left to continue her celebration leaving Valencia to stew ("I Need to Find My Frenemy").