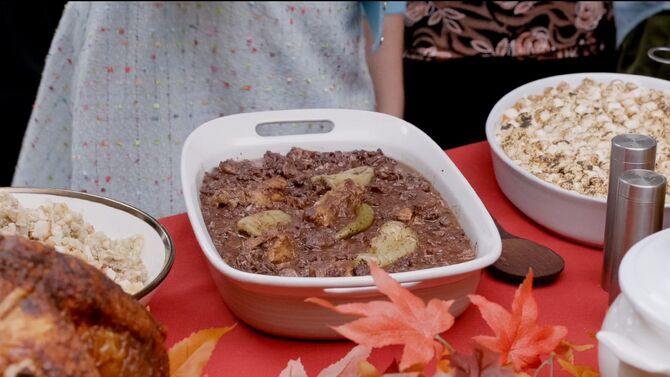 In November 2015 as part of her quest to win Josh's heart, Rebecca followed a suggestion from Paula to win over his parents first. To that end, they staged a random meeting with Mrs.Chan at an Asian grocery store. Mrs.Chan was delighted to see Rebecca again and invited her to spend Thanksgiving with the Chan family. Rebecca decided to bring Dinuguan to the festivities which was a popular Filipino stew. Paula showed up as she was cooking the meal and commented on how horrible it smelled. Rebecca explained the aroma was due to the pigs' blood the pork was basted in. After the Dinuguan was finished cooking she dressed conservatively for the occasion and added a special brooch Paula gave her.

She headed to the Chan residence and once she was there both she and her Dinuguan proved to be a big hit with Josh's family. However, her stomach was unused to eating such unique Filipino delicacies. After dinner was over Rebecca started to feel sick and needed to use the bathroom. As Valencia had warned her earlier she was having trouble digesting the food. Rebecca was about to use the facilities when she overheard Josh and Valencia fighting in the room next door. The fighting then turned into them having sex and Rebecca was forced to hold in the remnants of the Dinuguan until they were done. She somehow made it back to her own place to use the toilet ("My First Thanksgiving With Josh!").