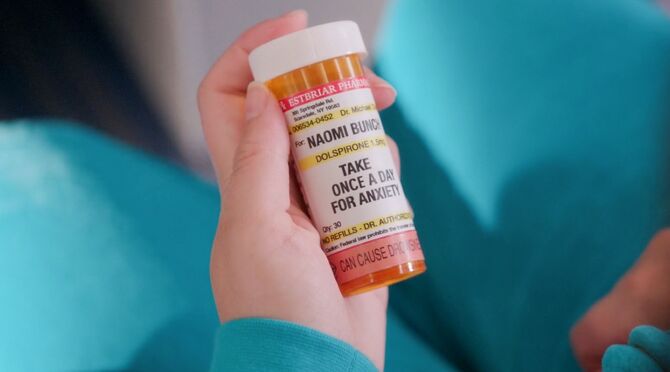 In 2015, Naomi Bunch’s daughter Rebecca was left at the altar by her fiancée Josh Chan in West Covina. Rebecca had an emotional breakdown and pushed away all of her friends. She then accepted Naomi’s offer to return home to Scarsdale. Naomi wanted to help get her daughters life back on track but discovered a more pressing problem. After looking on Rebecca’s laptop she saw the browsing history was of websites on how to commit suicide. Naomi shifted her focus to getting her daughter emotionally stabilized and then getting her professional help. To that end she used her prescription medication of Dolspirone, an anti-anxiety drug. She crushed a pill into a strawberry milkshake she made for Rebecca and got her daughter to drink it.

She also attempted to keep Rebecca distracted from her research by actually being nice to her. This included watching TV together, wearing a track suit Rebecca got her years ago, and playing games like “Twister.” Throughout this she was giving Rebecca Dolspirone laced strawberry milkshakes. However, Rebecca started to suspect something was wrong when her frenemy Audra Levine visited and pointed out Naomi’s unusual behavior. Rebecca searched the house and found a bottle of Dolspirone hidden in a drawer. She confronted her mother about this who confessed to what she had been doing. Naomi defended her actions by saying she wanted to help Rebecca but her daughter refused to listen.

Rebecca let and got a flight back to West Covina, California but realized she rejected all her friends there. She jokingly asked a stewardess if they could drop her off before reaching their destination. The stewardess sympathized but all she could offer to soothe her anxiety was a glass of Merlot. After Rebecca recieved the wine she discovered she still had the bottle of Dolspirone in her pocket. She started to down all of the pills at once and as the drowsiness kicked in she imagined she saw the word “hope” on the stewardess call button located above her. Rebecca pressed the button summoning the stewardess and then asked for help after handing over the empty bottle of Dolspirone ("I Never Want to See Josh Again.").

Dolspirone is a not an actual anti-depressent drug but a fictional substitution used to avoid promoting a real drug on the show or influencing viewers to try a particular drug themselves. The Season Four episode "I Have To Get Out" featured a musical number called "Anti-Depressants Are So Not A Big Deal." In this song the lyrics feature meta commentary explaining that legally they can't use the names of actual prescription drugs. Nonetheless, it follows known psychopharmaceutical naming conventions, and both the name and primary effects (anti-anxiety) closely resemble the real-life drug buspirone. This drug isn't a benzodiazepine like many anti-anxiety meds, which also lowers the risk of severe complications in event of an overdose.