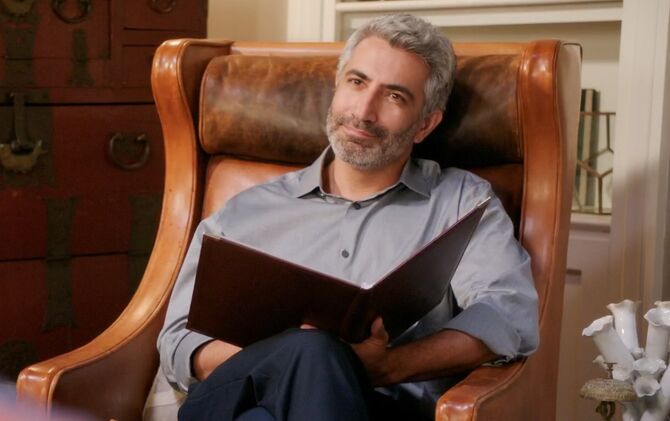 Dr. Davit Akopian is a local West Covina therapist. He is married to Noelle who is herself a successful therapist. Together they share a practice which is located in their house. Although he himself is an accomplished therapist he seems to be not as well known in the area as his wife. His first appearance was in the Season Three episode “Josh's Ex-Girlfriend Wants Revenge.” He is portrayed by actor Piter Marek.

In 2015, Dr. Davit Akopian office was contacted by Josh Wilson who scheduled an appointment for himself and his boyfriend Darryl Whitefeather. Josh thanked Davit for seeing them on such short noticed and Darryl told him he heard good things about the doctor. The doctor replied that he might of been thinking of his wife Noelle who got rave reviews on Yelp. Davit asked what he could do for them and Darryl began by saying Josh was annoyed with him for wearing an anteater costume. Davit was confused and asked them to clarify. Josh explained Darryl’s tendency to go over the top with whatever he’s obsessed with at the moment. This included learning of his Indian heritage and changing his last name without updating his I.D.s and wearing an anteater costume to promote his health bars Josh created.

Darryl didn’t deny this criticism but pointed out his boyfriend already knew this about him. He addeed that he did more with the health bar idea in two days than Josh did in two years. Darryl argued this enthusiasm he made him a good father and Josh should appreciate what a catch he is. Josh realized Darryl was right and apologized as Davit looked on approvingly ("Josh's Ex-Girlfriend Wants Revenge"). Davit also had as a patient a woman named Mona who worked at a mutual funds firm. She was dating a fellow graduate of Stanford named Nathaniel. She suspected he was cheating on her with a co-worker. She didn’t have an answer when Davit asked her why she was waiting around for someone she didn’t trust ("Trent?!").