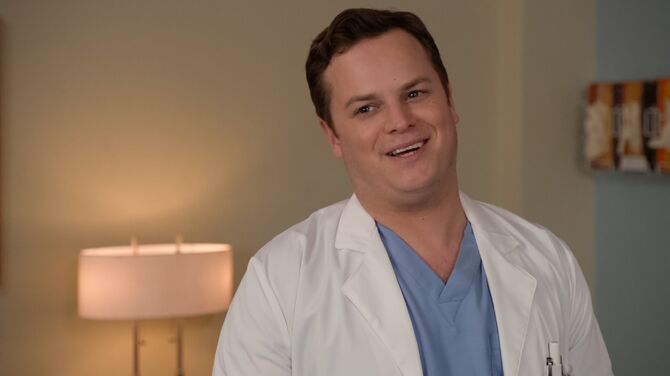 Dr. Nick Roth A man of medicine and bad comedy

Dr. Nick Roth is a doctor at Glenn Willow Medical Center in West Covina, California who also moonlights as a bad stand up comic. Fortunately he is much better at medicine than he is at comedy. However, his bedside manner could use improvement as he has a tendency to make inappropriate comments in the form of bad jokes. He has a twin brother Dr. Chester Roth who also works at the same hospital as a cardiologist. His first appearance was the Season One episode "Why Is Josh in a Bad Mood?". He is portrayed by actor/comedian Dan Gregor husband of "Crazy Ex-Girlfriend" co-creator and star Rachel Bloom.

Dr. Roth was working the night shift at the hospital and treated a patient that was brought in named Rebecca Bunch. He learned she had UTI and hadn't taken any medication to treat it which caused an infection spread to her kidneys. She was put in a private room and given treatment which put her to sleep. Sometime later, Dr.Roth entered the patient's room where he found her friends Josh Chan, Greg Serrano and Paula Proctor inside. Paula asked him what was wrong with Rebecca and Dr. Roth responded with an inappropriate joke. Rebecca's friends were put off by his reply and Dr. Roth explained that he moonlights as a stand-up comic. He explained that he studies at Claremont at night since his wife works late hours and lamented that he hardly sees her.

Dr. Roth then got serious and explained their friends condition. Upon learning it was a UTI Paula got very upset realizing that her friend had lied to her about not sleeping with anyone. Dr. Roth nodded in response when Greg explained that Paula and Rebecca have boundary issues. When Paula reiterated that never lie to each other Josh wondered aloud who Rebecca could be sleeping with. Dr.Roth cast a sideways look at Greg as did Paula and Josh who began to suspect the truth. Dr.Roth exited out of the awkward scene aware that a "truth bomb" was coming. Later, Dr.Roth was at the comedy club Laff Laff Carafe doing a stand up set. He told a poorly recieved joke about the differences between men and women when they flatline ("Why Is Josh in a Bad Mood?").

Dr. Roth later treated Trent Maddock who was hit by a bus and had every bone in his body broken. Since Trent was in a full body cast and unable to move Roth saw this as an opportunity to try out his comedy material on his patient. Roth regaled Trent with all the jokes he had been workshopping for his stand-up routine. Months passed as his patient began to heal and Roth continued to practice his jokes for his immobile and unwilling audience of one. When Roth told Trent he was going to work on a one man stage show the very next day he found his patient was gone. Trent had broken out of his cast and managed to escape from the hospital under his own power as he was unable to take anymore of Dr. Roth’s material ("Trent?!").