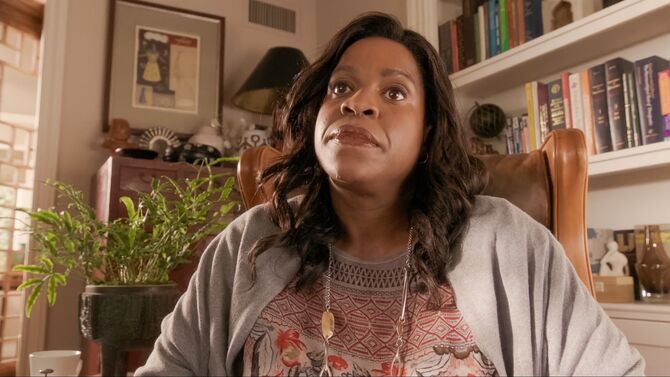 Dr. Akopian's session with Rebecca Bunch has her patient discuss a "love triangle" she believes to be the center of with Josh Chan and Greg Serrano. Akopian told Rebecca she's not in a good place to be in a relationship and neither man seemed to be offering one. Rebecca disagreed and decided to seek guidance from the universe to choose between them. After she left, Akopian questioned if taking Rebecca's money was ethical but reminded herself she was saving up for a kayak. At the next session, Akopian learned Rebecca believed all signs now pointed to Greg. Akopian pointedly asked Rebecca if she heard anything she said. When Rebecca ignored her comment and left Akopian started chanting about the kayak ("All Signs Point to Josh...Or is it Josh's Friend?").

Sometime later at another therapy session with Rebecca, Akopian was barely listening when she snapped to attention. Rebecca actually suggested that Josh, whom she recently started dating, may not be the happiness she was looking for. Noelle prompted Rebecca to continue and her patient said she may have other underlying issues that need to be addressed to truly be happy. Akopian was so giddy with this development that she asked Rebecca if she could stay longer and told her secretary Candace to cancel her next five appointments. Unfortunately before they could begin discussing her problems further Josh Chan barged into the office. A frustrated Akopian objected as Josh proposed to Rebecca who completely forgot about therapy and quickly accepted ("Will Scarsdale Like Josh's Shayna Punim?").

Retrieved from "https://cxg.fandom.com/wiki/Dr._Noelle_Akopian?oldid=17527"
Community content is available under CC-BY-SA unless otherwise noted.