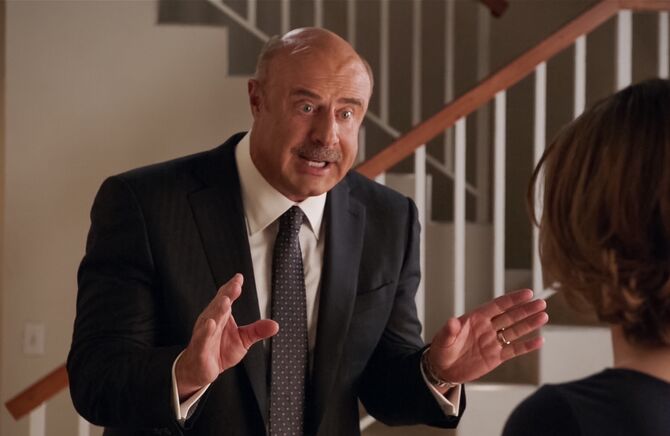 Dr. Phillip Calvin "Phil" McGraw (better known as Dr.Phil) is an American television personality, author, and psychologist. He gained fame as a frequent guest on the "The Oprah Winfrey Show" and became the host of his own daytime talk show "Dr.Phil". After watching an episode of his show, Rebecca Bunch later hallucinates that he is with her offering opinions on her actions. His first appearance was in the Season One episode "I'm So Happy that Josh is So Happy!". He is portrayed by himself.

In 2015 not long after the Thanksgiving holiday, Rebecca Bunch was depressed over her ex-boyfriend Josh Chan moved in with his girlfriend. This caused Rebecca to botch a presentation to Calvin Young for her law firm after drinking vodka. Darryl sent her home to pull herself together and work on the presentation for Monday. Rebecca instead wallowed in her misery while watching TV shows like Dr. Phil. She began to daydream that she was in a montage (♫ Sexy French Depression ♫) only to be pulled out of her reverie by Dr. Phil who was sitting next to her. He was a figment of her imagination who warned her not to so easily embrace depression. The next morning Rebecca's hallucination was still there as she searched her kitchen drawers for something.

She asked him if he thought she was schizophrenic but Dr.Phil reminded her he wasn't real. He did tell her that he thought she had a great imagination and that he loved her pretzel musical number. Dr. Phil then realized she was looking for prescription drugs after she tried to swallow a shoe lace tip. Dr. Phil suggested since she was suffering from anxiety and depression she should see a doctor first before taking drugs. Rebecca then set up an appointment with local therapist Dr. Akopian. She was just there to get more prescription medication and was turned away. Rebecca went to use the restroom on the way out and found a single ADD pill on the floor. When she got home a horrified Dr. Phil warned her not to take it but Rebecca ignored him.

Later Rebecca asked him to borrow her some money to buy Stacy Whitefeather's shares at the law firm, but he refused. ("Oh Nathaniel, It's On!")