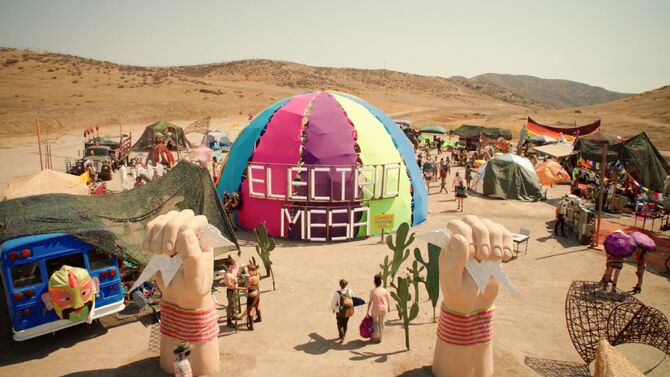 Electric Mesa is an annual gathering of citizens throughout the San Gabriel Valley. It is a temporarily built community made up of tents which are located in the desert. Its purposes are the celebration of the arts and getting back in touch with nature. West Covina native Josh Wilson has been a regular at the event and is familiar with many of the other participants. Its first appearance was in the Season Two episode "Why Is Josh's Ex-Girlfriend Eating Carbs?".

Rebecca is at the office when she learns about her boss and his boyfriend Josh Wilson's plans to attend an event called Electric Mesa. Darryl tells her that according to a brochure he got it's a place where people can "connect, refresh, and heal". The event reminded Rebecca of a book she just read. She belived it was the exact thing she needed to bond with Valencia Perez, the ex-girlfriend of her ex-boyfriend Josh Chan. Since Valencia and Josh had broken up the once health conscious yoga instructor she had fell into a depression and spent her days eating junk food. Rebecca felt pity for her as well as guilt since she felt responsible for her situation.

In an effort to make things right and snap Valencia out of her funk, Rebecca tricked Valencia into traveling with her to Electric Mesa. Valencia protested at first but eventually agreed to participate as she had nothing better to do. Elsewhere at the Mesa, Darryl and WhiJo were settling in when they met an old friend of Wilson s named Carl. Later at Sherpa Allen's 'Sensory Immersion Bath', Rebecca pestered Valencia with questions about Josh. Meanwhile Darryl found out that Carl and WhiJo used to date. During the session the speakers playing the music shorted out ruining the ambience. A call was made to the Aloha Tech Center and Josh Chan was sent by his boss Alex to go fix it.

Valencia then tried to leave the Mesa as Rebecca pleaded with her to stay and get a drink. Valencia gives in but they discover the liquid they imbibed was laced with a drug called "Triceratops". They experience separate vivid hallucination where both women are in a ballet with Josh and end up killing him (♫ Triceratops Ballet ♫). They are shocked when they emerge from the experience and see Josh has arrived to fix the sound equipment. Rebecca wanted to get revenge for him breaking their hearts but Valencia was unsure. Meanwhile, Darryl is further agitated after learning that Carl isn't the only ex-boyfriend of WhiJo at the festival. Not only that but judging by the exes Josh has a particular type.

Rebecca convinces Valencia to join her in ruining the electronics Josh just fixed by peeing on it. Once they finish Josh showed up and they bonded while they berated him for how badly he treated both of them. Later, Darryl runs into Rebecca and takes her advice to talk to WhiJo about his anxieties about their relationship. He learns WhiJo also has fears but is assured he wants to be with Darryl and not just his type. Meanwhile, Josh Chan discussed his recent plan to be celibate with one of the Mesa's leaders Sherpa Allen. However, Chan reconsidered his decision after meeting a pretty woman named Anna who thanked him for fixing Electric Mesa's sound system ("Why Is Josh's Ex-Girlfriend Eating Carbs?").