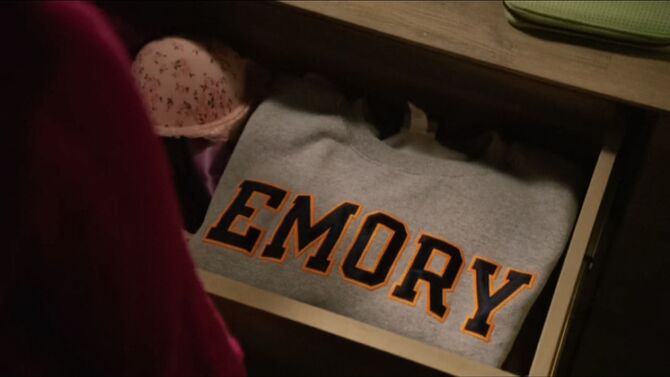 Emory sweatshirt Shirt with the Emory University logo on the front
Owned by: Greg Serrano — First Appearance: "Where Is Josh's Friend?"

The Emory sweatshirt was a garment once owned by Greg Serrano as a reminder of his acceptance to Emory University years ago. He left this shirt at Rebecca's apartment and it became a vestige of their short time together as a couple. Once Greg left West Covina to finally attend the university Rebecca destroyed it along with other reminders of him as a symbolic way of moving on. It's first appearance was in the Season Two episode "Where Is Josh's Friend?".

In 2016 Rebecca Bunch and Greg Serrano had a brief relationship and at one point he left clothes at her place in a dresser drawer. One of those items was his Emory sweatshirt; Greg had been accepted to the university years ago but never went due to his father's illness. He and Rebecca unofficially broke up after he got drunk on a wedding date and disappeared for a month afterwards. Rebecca began sleeping with her ex-boyfriend and Greg's best friend Josh Chan who had also started living with her. She offered Greg's old drawer as a place to put a few of Josh's things having forgotten the Emory sweatshirt was still inside.

After seeing the shirt Josh had a nightmare later that night. It featured Greg wearing his Emory sweatshirt and berating him for sleeping with Rebecca. In the dream Greg transformed into a hawk which was also wearing the shirt. Upon waking up, Josh briefly moved out of the apartment due to his guilt. During that time Rebecca learned Greg had gone incommunicado to deal with his alcohol addiction ("Where Is Josh's Friend?"). When he emerged from seclusion Rebecca had a talk with Greg about what happened between them and his sobriety. This reawakened feelings she had for him and she went to bed that night clutching Greg’s Emory sweatshirt ("When Will Josh See How Cool I Am?").

Rebecca eventually found herself rejected by both Josh and Greg and imagined her ex-boyfriends taunting her (♫ We Tapped That Ass ♫). She gathered all the items they left behind at her place and anything related to them that she had. The Emory sweatshirt alongside everything else was dumped into the kitchen sink. Rebecca set the items on fire and hoped destroying them would help her move on. The flames spread burning the apartment and resulting in an embarrassing 911 phone call. The disposal of the Emory sweatshirt brought about unwanted notoriety after the call was uploaded on the internet and became viral ("When Will Josh and His Friend Leave Me Alone?")