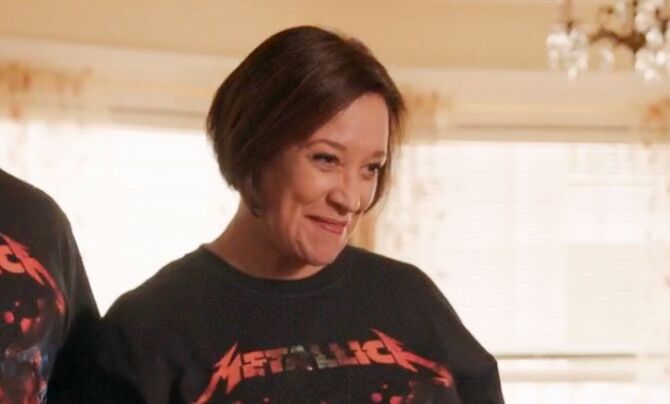 Estella is a native of West Covina, California and mother of Hector. She and her son are very close and even have a podcast about relationships which they record and produce. She was first heard in the Season One episode “I'm So Happy That Josh Is So Happy!” and her onscreen debut was in the Season Two episode "Can Josh Take A Leap Of Faith?” She is portrayed by actor Debra Cardona.

In 2015, Estella’s son Hector and his crew were going to go on their annual beach trip. Her son was notorious amongst his friends for not being on time and arriving late to whatever event he was to go with them to. To prevent this from happening he got as many alarms as he could to wake himself up. Unfortunately despite his efforts Hector slept solidly through the noise for several hours ignoring the alarms far past the appointed time. Estella heard all the multiple alarms emanating from Hector’s room and went to put an end to the ruckus. She banged on his bedroom door repeatedly yelling his name until he finally woke up ("I'm So Happy That Josh Is So Happy!")

Later that year, Estella was Hector’s plus one to his friend Josh Chan’s wedding to Rebecca Bunch. At the ceremony they were greeted by one of Rebecca’s bridesmaids Heather Davis. Estella thanked her when Heather complimented them on their podcast “Dating For All Ages” believing that it toes the line between creepy and sweet. Estella then mentioned to Hector she was going to see the D.J. so she could give him a list of their songs to play for when they dance together at the reception. When Heather was pulled away to take care of a wedding detail Hector told Estella they should have her over for dinner. Later when Rebecca ran past the guests Estella covered her son’s eyes ("Can Josh Take A Leap Of Faith?")

Months later, Estella agreed to let Hector’s friend Josh stay with them since his own mother Lourdes needed his room for her daycare business. Estella and her son also continued to do their podcast and even had Heather on as a guest. She had just started dating Hector but was somewhat uncomfortable disclosing the details of that relationship to his mom. Meanwhile, Estella enjoyed having Josh stay with them and they began to become close. They even decided to go see a Metallica concert together. At the same time her son and Heather’s relationship was beginning to get more serious. Hector decided to move in with his girlfriend feeling it was time for him to make a big change ("Oh Nathaniel, It's On!")

Retrieved from "https://cxg.fandom.com/wiki/Estella?oldid=18533"
Community content is available under CC-BY-SA unless otherwise noted.