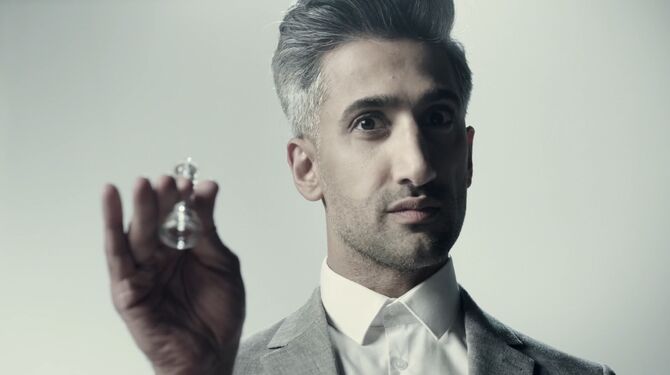 Fett Regoso is a fashionista who had a successful run in the 1990s and is currently enjoying a revival of his brand today. His initial rise in popularity was due to a series of commercials which, although cutting edge at the time, did not age well and became controversial. His first appearance was in the Season Four episode "I'm Making Up For Lost Time." He is portrayed by real life fashion designer and television personality Tan France.

Back in 1994, Fett Regoso was filming a commercial for his latest product, a cologne called "Take Her." It was to be part of a stylish and provocative avant grade national ad campaign promotion. The commercial featured a monochrome setting and had fashion models striking odd poses. Fett was not only to provide narration of the bizarre sequence but also appear in it as well. He was to wander the setting, take a chess piece off a game board, and then deliver a monologue at the camera. However, throughout production Fett didn't have a good feeling about the message the commercial was sending. He believed the tone of the ad was off and called a stop to filming right before delivering his speech.

The male director asked what was the matter and Fett told him something didn't feel right. The director agreed and suggested the women should be naked and the men should be wearing bigger boots. Fett explained he was uncomfortable with the message the commercial appeared to be sending. It seemed to be misogynistic in nature and the repeated use of the cologne name in the background could be wrongly misinterpreted if taken out of context. He didn't think the ad would age well and that's why he wanted a female director to prevent this from happening. The director laughed at the idea of a female director and instead insisted they continue filming ("I'm Making Up For Lost Time").