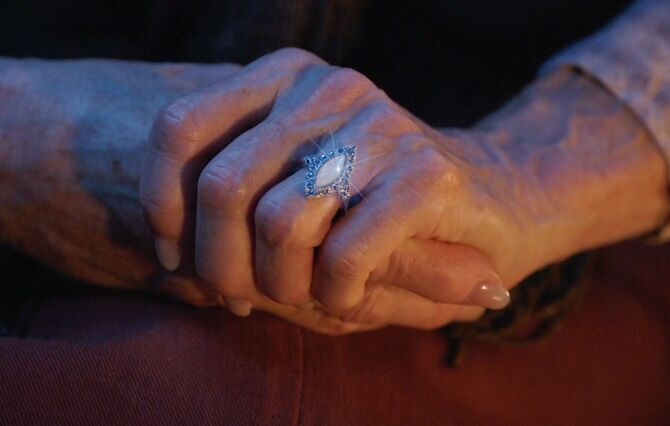 The Garfinkel ring is a family heirloom on Rebecca Bunch's mother's side of the family. It was once used, in conjunction with an ox, to purchase Rebecca's great great grandmother. Traditionally within the family it has been passed down to the next generation from mother to daughter on the child's eighteenth birthday. However, Naomi Bunch held on to to it passed her daughter's anointed time until she believed Rebecca truly had earned it. The ring was first seen in the Season One episode "My Mom, Greg's Mom and Josh's Sweet Dance Moves!".

In 1901, a mother and daughter were traveling on a ship headed to America, having fled their home country in a hurry. They brought with them a family heirloom passed down from one generation to the next known as the Garfinkel ring. The daughter asked her mother when she would recieve the ring and was told she hadn't earned it yet. Over a century later in the year 2015, the ring was now in the possession of Naomi Bunch-mother of Rebecca Bunch, an attorney who just moved from New York City to West Covina, California. Just like her ancestor Naomi refused to give her daughter the ring until she believed she had earned it. Mrs.Bunch brought the ring with her when she visited her daughter on the west coast.

Rebecca accidentally discovered the keepsake in her mother's purse and assumed she would finally be receiving the ring. To that end she tried to make the visit go as well as possible. She went as far as asking her client Calvin Young to sleep with her mother who had been flirting with him. However, the visit went poorly after Mrs.Bunch discovered her daughter moved to West Covina for Josh Chan. Mrs.Bunch's critical reaction upset Rebecca, who claimed to no longer cared about the family heirloom. She called out her mother for her poor parenting and the argument unexpectedly led to a cathartic moment. Naomi told her daughter that despite how critical she is of Rebecca it's always been because she loves her too much ("My Mom, Greg's Mom and Josh's Sweet Dance Moves!").

The following year Rebecca was involved in a class action lawsuit against Greater City Water. Although Rebecca lost her case, the lawsuit received national attention and Rebecca was hailed as a hero who fought against an evil corporation. Naomi Bunch heard of her daughters exploits and called her to say how proud she was of her. She told her to daughter to expect a gift in the mail and Rebecca was shocked when she got the package and inside was the Garfinkel ring. At the time Rebecca was having financial difficulties and wanted to buy a plane ticket so she could follow Josh who was going to Hawaii. In desperation she pawned the Garfinkel ring to make the purchase naively confident that she'd be able to get it back later ("Josh is Going to Hawaii!").

The ring remained at the pawn shop for months during which time Rebecca and Josh started dating. Together they went on a trip to Scarsdale for Rebecca's cousin's Bar Mitzvah where they stayed with her mother Naomi's house. Josh was told to lie about the Garfinkel ring if asked about it and say it was in a safe deposit box. During the visit Rabbi Shari made Rebecca realize that being with Josh didn't resolve any of her underlying issues. Josh sensed Rebecca's unhappiness and got advice from Naomi. Upon returning to West Covina he got the Garfinkel ring out of hock. Josh then surprised Rebecca by interrupting her therapy session with Dr. Noelle Akopian. Over Akopian's objections Josh presented the ring and proposed to Rebecca who immediately said yes ("Will Scarsdale Like Josh's Shayna Punim?").

Sometime later, Rebecca wore the ring to work and showed it off to her co-workers at Whitefeather & Associates during a staff meeting. Rebecca was annoyed when Karen asked why Josh gave her an old ring back instead of him getting a new one. She defended his choice by saying it was a great romantic gesture since it was a precious family heirloom of hers. George questioned how important it could have been since Rebecca hocked it for some quick cash. Rebecca ignored his comment and covered his face with her hand while admiring the ring on her finger. When Nathaniel arrived she showed off the ring to him as well but got a backhanded compliment on her appearance as his response ("Josh Is the Man Of My Dreams, Right?").

After Josh left Rebecca at the altar she still kept the Garfinkel ring. Months passed and Rebecca suffered a number of personal struggles. This included being fired from Whitefeather & Associates by her boss and former boyfriend Nathaniel Plimpton III. Angry at her termination and also jealous he had moved on to someone else, Rebecca decided to take the firm away from Nathaniel. She found a legal loophole which allowed her to void the sale of Nathaniel’s purchase of Stacy Whitefeather’s shares in the firm. With Darryl on her side she was then going to buy the shares herself giving them controlling interest. She told Paula she was going get the money by selling the Garfinkel ring. However, when she had it appraised by a jeweler she found out the Garfinkel ring she had was a fake ("Oh Nathaniel, It's On!").