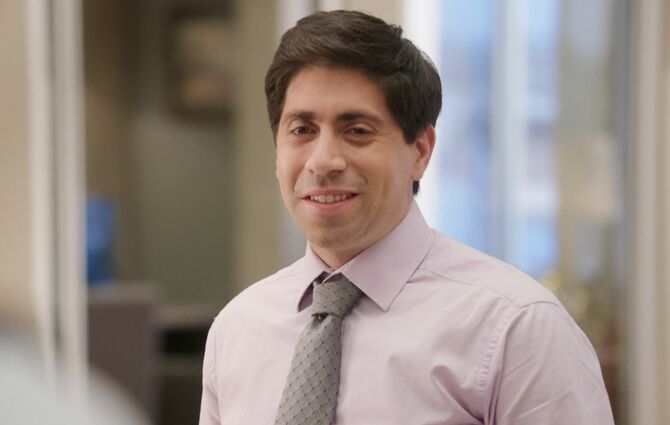 George is a member of the office staff at Whitefeather & Associates. He is usually downbeat and projects an air of melancholy. His personality and soft spoken mannerisms has made him mostly forgettable to all his co-workers who can't seem to remember his name. He was let go at the firm by Nathaniel at one point due to budget cuts but eventually rehired because the office was under staffed. He has an odd relationship with his boss Nathaniel acting as his aide-de-camp and sounding board. His first appearance was in the Season One episode "Josh and I Go to Los Angeles!". He is portrayed by actor/comedian Danny Jolles.

In 2015, George was one of several office staff members at Whitefeather & Associates helping out on a huge class action lawsuit thier ace attorney Rebecca Bunch filed against the conglomerate Greater City Water. While George and the others were doing the scut work, paralegal Paula Proctor and head of the firm Darryl Whitefeather was in the Boardroom strategizing the case with Rebecca and thier client Josh Chan. George was surprised when a trio of attorneys from the New York law firm Sampson & Saunders unexpectedly showed up. They had an offer from Greater City Waterand George went to the boardroom to tell Rebecca. He was at first chastised for interrupting until he told Rebecca about the visitors ("Josh and I Go to Los Angeles!").

The following year George and his co-workers at the law firm were surprised when Darryl sold half of it to attorney Nathaniel Plimpton III and his family. George joined Maya, Paula, Tim and Karen in voicing concerns on if the new management was going to be laying off employees (♫ Who's The New Guy? ♫). Their fears turned out to be true later when George was singled out by Nathaniel in the office and casually fired in front of everyone. Rebecca and Darryl protested his termination despite repeatedly getting his name wrong. However, Nathaniel was looking to make and example and told George to pack his things and go. George wasn’t completely shocked by what happened and sensed it was going to be him that got fired (♫ George's Turn ♫).

Eventually George was hired back by Nathaniel as the firm was understaffed much to the surprise of Darryl who still couldn’t remember his name. When George was going to leave the office one night he found the elevator was stalled. Rebecca Bunch and Nathaniel were trapped inside and George told them he would get help if they called him by the right name. Neither could recall what it was and Nathaniel suggested he be less forgettable. After telling them his name George left them there overnight. The next morning Nathaniel confronted George and after calling him by his name told him he was fired again. George wasn’t fazed by the termination and was just thrilled someone got his name right ("Josh Is the Man Of My Dreams, Right?").