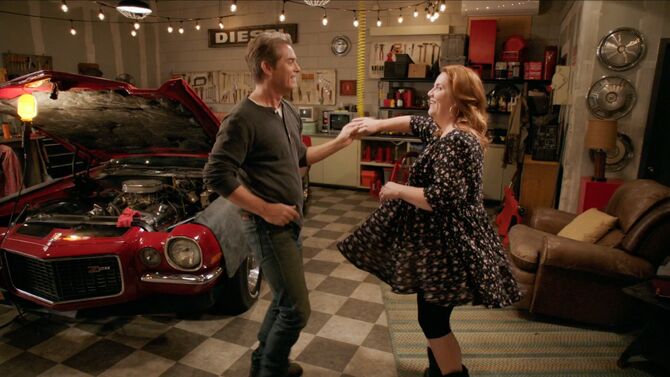 Rebecca returns home with books on Borderline personality disorder that she shows off to Heather. She later goes to Dr. Shin’s office to get positive feedback on her research. Shin suggests she should spend more time reconnecting with the real world instead. At the Proctor residence, Paula cooks breakfast only to learn her family are eating out. Scott says they’ve learned to fend for themselves since they are always second to whatever her latest obsession is. Over at Home Base, Kevin offers an unemployed Josh a job after eavesdropping on his conversation with with Chris. Also at the bar is Darryl and his daughter Madison who tries to convince him to end things with his boyfriend since they want different things.

However, when WhiJo arrives Darryl can’t bring himself himself to do it. At Sugar Face, Paula tells Rebecca she’s headed back to Buffalo for a few days. Since her own family doesn’t need her now she’s going to look after her father who just had an accident. Rebecca asks if she can go too as she sees this an opportunity to follow Dr. Shin’s suggestion. Nathaniel stops by Rebecca’s place and finds her packing for the trip with Paula. Although Rebecca is happy to see him she reluctantly tells him to go as she’s not ready to deal with their sexual tension at this phase of her recovery. After a flight to Buffalo, Rebecca and Paula arrive at the O’Brien residence where she meets her friends father Bob.

While Paula is embarrassed by her father’s boorish behavior Rebecca finds him amusing. Paula goes to the market to pick up supplies when she runs into her ex-boyfriend Jeff Channington (♫ First Penis I Saw ♫). Once they catch up Jeff invites her to see a Camaro he’s restoring. Back in West Covina, Josh annoys Chris and Heather with his theatrical bartending antics. However, he does manage to catch the eye of a customer named Teresa. In Buffalo, Paula returns home wanting to talk to Rebecca but finds her busy bonding with her father over alcohol. They drink well into the night until Bob goes to sleep. Rebecca then gets a message from Nathaniel which leads to them sexting each other.

Meanwhile, Paula sneaks out to meet with Jeff in his garage and again goes to see him the next morning while lying to Rebecca about it. Over at Home Base, Josh pops a pimple he got after unhygienically mishandling used glasses. Later, Darryl and WhiJo show up at the bar at the same time as a baby shower is taking place. Once Darryl realizes Madison set this up he admits to his boyfriend they have to break up since WhiJo doesn’t want a child. Hours later, Darryl and WhiJo are still saying goodbye when Hector invites them to watch Josh who is he making a spectacle of himself serving costumers. Josh notices his blemish has spread but ignores both Heather and Teresa’s warning of it being a staph infection.

He mixes drinks only to have a tumbler hit his infection causing pus to shoot out into a martini. In Buffalo, Rebecca and Bob continue to bond (♫ My Friend's Dad ♫) as Paula spends time with Jeff. Eventually Rebecca wonders where Paula is and tells Bob about his daughter hanging out with a friend who has a Camaro. Bob has a realization and Rebecca joins him when he leaves to find Paula. Meanwhile, Jeff admits to Paula he regrets breaking up with her years ago. After Paula rejects a kiss from Jeff, Bob bursts in armed with a rifle followed by Rebecca. Paula calms the situation down and tells Jeff it was nice to see him again. Later, Paula tells Rebecca she’s glad to have gotten closure with Jeff.

Rebecca suggests they be honest with each other, eschew their mother/daughter dynamic and just be best friends. On the west coast, Heather comforts a demoralized Josh at Home Base and assures him he'll eventually figure his life out. Before leaving Buffalo Paula and Rebecca say goodbye to Bob. He is actually complimentary towards his daughter and asks them to visit again. Once they are back in West Covina, Paula tells Scott she’ll always choose him while Rebecca goes to Nathaniel’s place and sleeps with him. Afterwards, Rebecca has a therapy session with Dr. Shin and tells him about the last few days. She is happy when he approves of her actions and awards her a sticker.