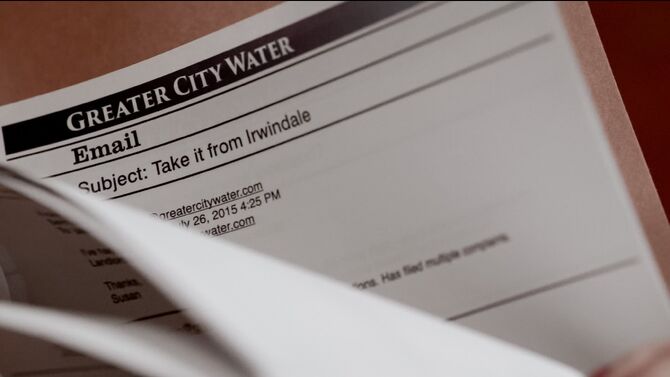 Greater City Water Water supplier for the San Gabriel Valley
Location: California — Debut: "Josh and I Work on a Case!"

Greater City Water is a conglomerate of utility companies, aqueduct owners and reservoir LLC's. It services all of the San Gabriel Valley providing the cities in the area water which includes the town of West Covina. The private business had a class action lawsuit filed against by Whitefeather & Associates spearheaded by Rebecca Bunch at the behest of local residents. The company's first appearance was in the Season One Episode "Josh and I Work on a Case!".

In 2015, a class action lawsuit was filed against the landlord of the West Covina apartment complex "Casitas de la Flores" for a cold shower epidemic the tenants were experiencing. The landlord was quick to offer a settlement which made the law firm involved, Whitefeather & Associates, immediately suspicious. Upon further investigation by the lead counsel on the case, Rebecca Bunch, a connection was discovered to the corporation Greater City Water. One of thier former employees named Bert conducted an independent study which showed the cold showers were linked to GCW. The company had been stealing water from cities in the San Gabriel Valley including West Covina. With Bert as thier star witness a new lawsuit was filed by Rebecca naming Greater City Water as the defendant ("Josh and I Work on a Case!").

Greater City Water hired a team of attorneys from a New York law firm to defend them. Ironically they were led by Audra Levine who was an old rival and acquaintance of Rebecca Bunch. The trial was held at the Los Angeles City courthouse and broadcast live on a local television station. Rebecca trotted out various testimonies from the plaintiffs until she got to the star witness Bert. He described how Greater City Water was taking water from localities and diverting it to Los Angeles. When it was Audra's turn to cross examine she pointed out that despite Bert's impressive credentials he had been suffering from Schizophrenia for sixteen years. Due to the revalation the judge had no choice but to dismiss the case against Greater City Water ("Josh and I Go to Los Angeles!").

However, although GCW won the case the problems from the incident didn't end there. A reporter from the LA Metro named Paul Remierez made a promise to Rebecca Bunch to follow up on her accusations. He suggested that if Berts theories were true than this could be the biggest story in the area since the The City of Bell Scandal. Through an unknown source he obtained a number of emails hacked from Greater City Waters computer servers. Based on that evidence he then published a scathing exposé on their illicit practices. He also praised Rebecca Bunch and her law firm's efforts to bring them to justice. This resulted in Rebecca getting a key to the city while Greater City Water had to do damage control ("Josh is Going to Hawaii!").