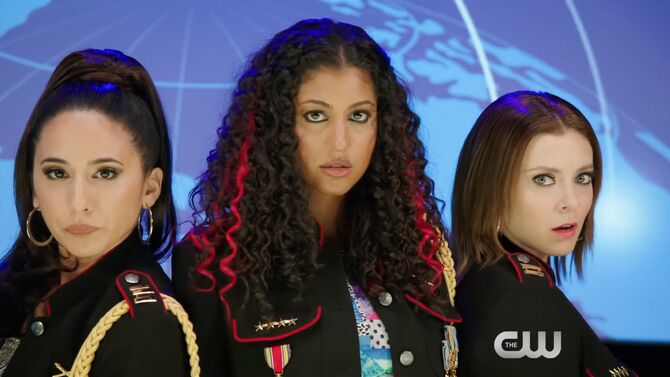 The Gurl Group is the relatively new trio of Rebecca Bunch, Heather Davis and Valencia Perez. Rebecca formed the group in the wake of recent heartbreaks she experienced. She moved in with Heather and bonded with Valencia over having been dumped by the same guy. The group's first appearance together was in the Season Two episode "Who Needs Josh When You Have a Girl Group?".

In 2016, Rebecca Bunch had been rejected romantically by both Josh Chan and Greg Serrano. Depressed, she sought out female friendship to fill that void. She moved out of her apartment and into a new place with Heather Davis. Inspired by a book, Rebecca reached out to her former rival Valencia Perez after seeing the rough shape she was in after her break up with Josh. Once they bonded at a festival, Valencia decided join Rebecca and Valencia in forming what would become the Gurl Group ("Why Is Josh's Ex-Girlfriend Eating Carbs?"). Rebecca began hanging out more with both women at places like Sugar Face and Home Base. She also daydreamed about them taking over the world (♫ Friendtopia ♫) as they enjoyed activities like posting selfies of themselves on Instagram.

However, Rebecca was worried her once close relationship with Paula Proctor was suffering as she spent more time with her new friends. She tricked Paula into attending a Gurl Group party she threw at her new house. The trio wore matching t-shirts which had the words '#gurlgroup4evah' printed on it. Paula was made to feel like even more of an outsider by wearing a shirt with the same phrase scribbled on it by a felt marker. As the night descended into awkwardness, Valencia kept asking Heather if this what girl groups were like. Heather told Rebecca that it was clear Paula did not want to be in the group but was ignored. The night ended in an argument between Rebecca and Paula about the nature of thier friendship ("Who Needs Josh When You Have a Girl Group?").