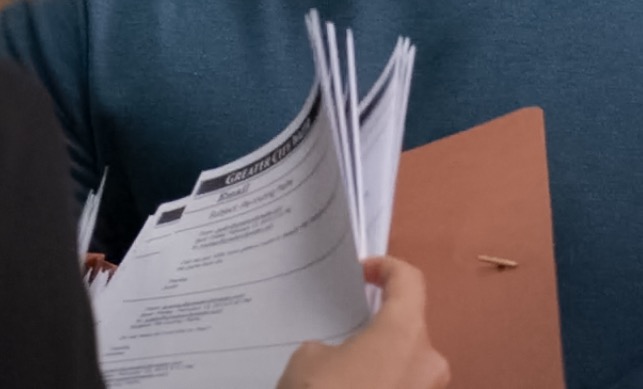 Hacked emails were print outs of Greater City Water electronic messages that detailed the diverting of water from smaller cities and funneling it to Los Angeles. In order to get Rebecca Bunch's favor Trent Maddock gave the copies to her in order to help her class action lawsuit against the company. The emails were first seen in the Season One episode "Josh and I Go to Los Angeles!".

In 2016, the law firm of Whitefeather & Associates launched a class action lawsuit against the the company Greater City Water. Attorney Rebecca Bunch helmed the suit which accused the company of taking water from local areas and diverting it to Los Angeles resulting in a cold shower epidemic in the San Gabriel Valley. Rebecca star witness was an ex-GCW employee named Bert but she feared his testimony wouldn't be enough against her old law firm's opposing counsel and personal nemesis Audra Levine. She told this to her former Harvard classmate Trent Maddock who was then posing as her boyfriend. Hoping to score points with her, Trent illegally download files from Greater City Water's servers. He gave these hacked emails to Rebecca on the day of the trail during recess.

Rebecca's case was not going well at that point as Bert's testimony was rendered meaningless after Audra revealed in cross examination that he was schizophrenic. She was extremely grateful to Trent as the email copies clearly laid out GCW's illicit activities. As thanks, and over Paula's objections, she seriously considered letting Trent sleep with her in bed as a reward before sending him away. Paula warned her not to use the stolen printouts as it could get Rebecca in legal trouble. When the trial started up again Rebecca struggled with whether or not to introduce the hacked emails as evidence. She rembered a time in Scarsdale when she and Audra were children competing and trying to one up each other at all costs.

Rebecca decided not to use the hacked emails and instead delivered a passionate speech about fighting for her new hometown against GCW's exploitation of it. Unfortunately the judge ruled that since Bert's testimony was tainted by his mental illness the case was dismissed. Afterwards, a reporter from the LA Metro named Paul Remierez made a promise to Rebecca to follow up on her accusations. To help his efforts she handed him the folder containing all the hacked emails Trent copied ("Josh and I Go to Los Angeles!"). Remierez published a scathing exposé using the emails detailing Greater City Water's illicit activities. He also praised Rebecca Bunch for taking a stand against the corporation which resulted in her being awarded the Key to the City ("Josh is Going to Hawaii!").