Happily Ever After rocks 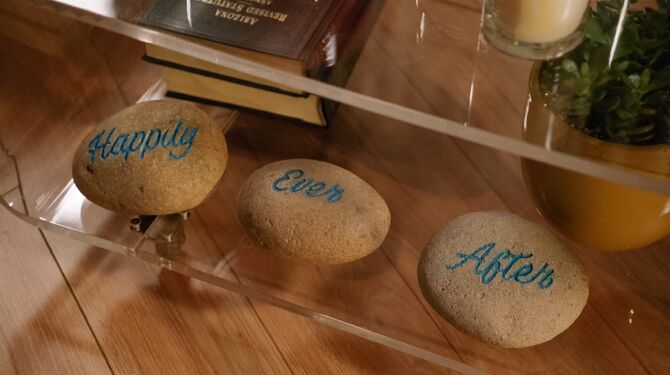 Happily Ever After rocks Tchotchkes on a coffee table
Owned by: Rebecca Bunch — First Appearance: "That Text Was Not Meant for Josh!"

Happily Ever After rocks are three decorative knick knacks which spell out the phrase on each rock word by word. Rebecca Bunch purchased them to add some flair amongst her sparse furnishings. They would later be involved in an event which changed Rebecca and Josh's relationship. The rocks first appeared in the Season One episode "That Text Was Not Meant for Josh!"

By February of 2016, Rebecca Bunch had finally finished furnishing her apartment. This included finishing the repainting of its walls, properly mounting the Giant fish and adding decorative Happily Ever After rocks to her coffee table. Later that day, Rebecca got caught by Josh inside of his apartment. She had broken in to erase a text she didn't mean to send him on his phone. Rebecca told him an elaborate lie that she was at his place because her apartment had been broken into. When she got the chance she called her friend and co-worker Paula Proctor for help. Without hesitation Paula agreed to throw a rock through Rebecca's patio door to authenticate her story.

At the time Paula was having a dinner date with her husband Scott who was suspicious about all the random phone calls she had been receiving. To allay his concerns Paula brought Scott along for her 'mission'. After arriving at Rebecca's apartment, Scott was so excited he went inside to use the bathroom. Once he finished he found a rock Paula told him she needed. He admired its perfect shape and showed it to Paula who was unaware of where he got it from. With Paula urging him on, Scott threw the rock through the sliding glass door. The two ran away leaving a mess of glass shards in their wake for Rebecca and Josh to find. Rebecca used the situation to her advantage to spend time with Josh.

As they were cleaning up the living room, Josh found the 'Ever' rock Scott threw underneath a chair. Like Scott he was impressed with how well formed the rock was as Rebecca grew concerned (♫ Where Is The Rock? ♫). Josh then noticed the word 'Ever' inscribed on it and looked at Rebecca in confusion. When he noticed her briefly looking at the coffee table Josh saw the empty space in between the other two rocks 'Happily' and 'After'. He put the rock back in in its proper place and realized Rebecca wasn't being truthful about what happened. Unnerved by how weird the whole situation had become he decided to go. Rebecca tried to make excuses but he refused to hear any more of her convoluted explanations ("That Text Was Not Meant for Josh!").