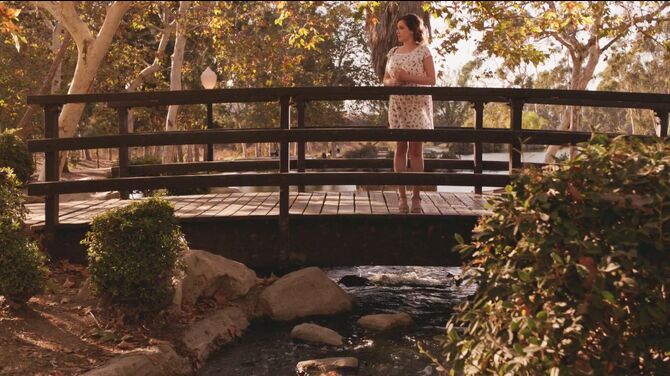 The Heritage Bridge is a small wooden structure located in West Covina, California that crosses over a stream of water. Darryl Whitefeather and his boyfriend Josh Wilson were frequent visitors to the bridge. It's first appearance was in the Season Two episode "All Signs Point to Josh...Or is it Josh's Friend?".

In 2016, Josh Chan was briefly romantically involved with Rebecca Bunch and was even living with her. However, a pregnancy scare coupled with his guilt over sleeping with his best friend's ex had him end things. Depressed over her situation Rebecca took a walk in the park and came across the Heritage Bridge. Her boss Darryl Whitefeather recommended she see as it was a favorite place he and his boyfriend Josh Wilson often visited. She was surprised to find that Greg Serrano was already there. He was mulling over an oppurtunity his dad made possible for him to finally attend Emory Unversity. His thoughts were interrupted by Rebecca and they marveled at the coincidence of running into each other. Once they finished their usual bantering Rebecca was about to go when Greg kissed her.

Rebecca offered that they could date again but this time take it slow and begin with a clean slate. She asked him to think about it and to meet her at the bridge tommorow at sunset if he wanted to try again. The next day Rebecca showed up early before the appointed time. A small distance away Greg approached the bridge having ignored his father's advice to not get involved with Rebecca again. He was happy when he saw Rebecca but his smile faded after he looked closer and saw a warning sign. It was an actual wooden sign posted in front of the bridge with a large letters that spelled "DANGER". Although it was there to warn pedestrians not to fall into the stream Greg saw the object as an actual omen. He decided not to make the rendezvous and left Rebecca waiting there on the bridge ("All Signs Point to Josh...Or is it Josh's Friend?").