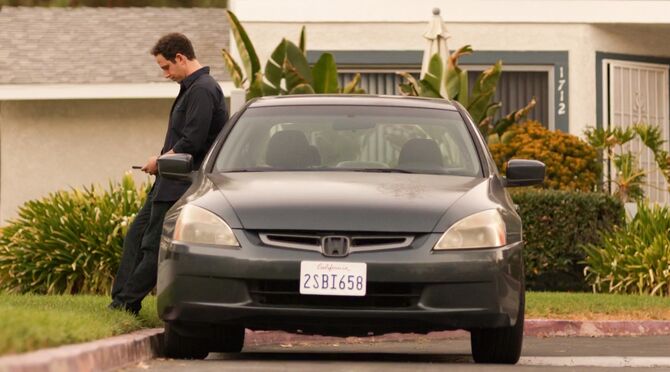 The Honda Accord is the vehicle owned by Greg Serrano when he lived in West Covina, California. It was a used and beat up old car which had many miles on it but usually managed to get Greg where he was going. It's first and only official appearance was in the Season One episode "Josh Just Happens to Live Here!".

In 2015, Greg Serrano first met Rebecca Bunch when she came to the bar looking for Josh. He invited her to go to a party his friend Bean was throwing at his house. After taking a nap he drove to Rebecca's apartment in his Honda Accord and waited for her outside. As he leaned against his car she finally appeared having finished primping for the occasion. When they went to Bean's residence Greg questioned her obvious interest in Josh. As a distraction she started making out with him. She got upset and started crying upon hearing the news that Josh had a girlfriend. Greg decided it was best to end the night and they left to go to his car so he could drive her back home ("Josh Just Happens to Live Here!").

The morning after Greg's date wedding with Rebecca he drove his car while still being technically intoxicated. The police had Greg stop the car and he went to jail after he failed the sobriety test. He wound up in front of a judge who sentenced Greg to attend Alcoholics Anonymous meetings. During this time he cut off contact to his friends and Rebecca embarrassed by the incident. When he finally met with Rebecca he revealed the reason as to why he was recklessly driving that morning. He had intended to apologize to Rebecca for his drunken behavior that night and also to tell her he loved her. Unfortunately he was driving his Honda Accord poorly which got him pulled over by the cops ("When Will Josh See How Cool I Am?").

Greg ultimately returned to West Covina and eventually started dating Rebecca once more. However, it didn’t last as Rebecca still needed to work on her own issues. Despite this Greg decided he still wanted to be with her but he wasn’t the only one. Josh Chan and Nathaniel Plimpton III also wanted to be with Rebecca and at WhiJo's suggestion, the three suitors decided to have a competition to win her affection. Each one was to have a date with her and she would ultimately decide who she wanted to be with. The date Greg came up with fell apart when his Honda Accord broke down. Instead of a romantic balloon ride, Greg and Rebecca ordered take out in the garage where his car was being repaired ("I Have a Date Tonight").