I'm Almost Over You 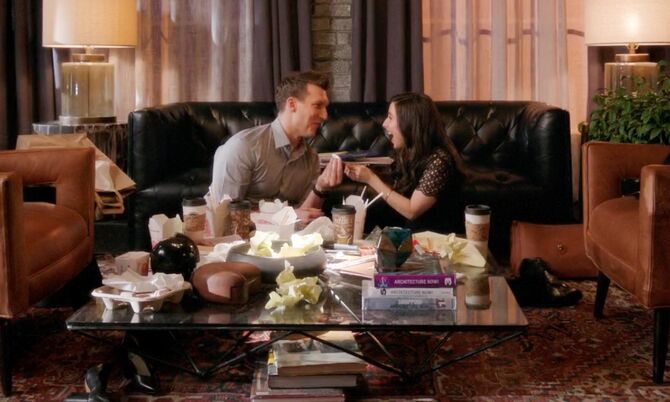 I'm Almost Over You

At the lobby of the office building at 7333 West Hacienda road, Greg and Rebecca are at Rebetzel's being open with their public displays of affection. An annoyed Nathaniel is watching alongside the security guard Leonard. Maya is also observing from afar as well although she’s watching her ex girlfriend Joanne with her new girlfriend Marcy. Upstairs at the firm Nathaniel talks to George about his romantic troubles. Paula joins in thinking they are discussing romantic comedies and Nathaniel learns Rebecca likes those kinds of movies. He rents a number of DVD's to educate himself on the genre. After watching several of them in his apartment he has a daydream about being the star of a romantic comedy.

In keeping with the genre he is a nerdy looking underdog who lives with his best friend and sports fanatic George. At work they are greeted by Darryl, who casually insults Nathaniel's appearance, and Paula who is obsessed with work. Bert arrives reimagined as a draconian boss who bullies his employees like the put upon Tim. Nathaniel and Maya are chosen by Bert to work on a presentation for the firm’s biggest client. All the Ron on tropes make Nathaniel realize his story arc is to deliver a grand gesture that wins over Rebecca. Jim the office gossip lets Nathaniel know that Rebecca's boyfriend Greg is reopening his father’s Italian restaurant. The rumor is he is expected to ask Rebecca an important question.

Nathaniel recognizes this as the perfect point in the narrative to fulfill his character’s destiny. He and George leave the office to think of a plan only to find Rebecca and Greg making out in the lobby. Maya is also there stalking her ex Joanne who is with her new girlfriend. Nathaniel has an idea and kisses Maya which makes Rebecca and Joanne jealous. Later back at the firm Nathaniel explains to Maya his scheme. They ditch working on thier project to focus on getting thier exes back. Jim interrupts them to announce that the building is hosting a Karaoke party tonight. Nathaniel proposes they use the event to flaunt their fake love in front of thier exes. To that end they both work on improving thier appearance.

Darryl, George and Paula bear witness to the make overs and give thier approval. That night at Home Base, Maya and Nathaniel sing a duet in front of their exes. After a shaky start they win over the crowd and demonstrate the noticeable chemistry between them (♫ Gratuitous Karaoke Moment ♫). They were so wrapped up in their success they failed to notice their exes left the bar. The next day at work, Nathaniel is insensitive towards Maya’s feelings she decides not to continue their ruse. Later at the park Nathaniel complains about Maya to George as they participate in Yoga class. George tells him to focus on Rebecca but also reminds him he still has to work on the big presentation with Maya.

Back at the firm, Maya and Nathaniel begrudgingly start work on the presentation only to find out the client is her ex-girlfriend Joanne's insurance company. Nathaniel suggests it’s an opportunity for Maya to win Joanne back. Maya in turn offers to help Nathaniel write his speech to Rebecca. The two spend all night at Nathaniel's apartment to prepare for both events and start to bond. The next day at the firm, Maya thoroughly wins over Joanne and afterwards they become couple again. She thanks Nathaniel and they briefly share a brief moment before Joanne interrupts them. That night at the Serrano restaurant grand opening, Nathaniel is about to deliver his speech when he suddenly thinks of Maya.

He changes his mind and rushes to Il Cubina interrupting Maya and Joanne’s date. He declares his love for Maya but she tells him she’s back with her ex now. Maya then turns into Rebecca who asks Nathaniel to just let her be happy. Reality sets in as Nathaniel is woken up from his reverie by a knock on the door. It’s the pizza delivery guy who has to comfort Nathaniel after he breaks down crying. The next day at Rebetzel's Nathaniel tells Maya she can do better than Joanne before talking to Rebecca. When he’s told by her she’s seeing Greg again Nathaniel let’s her know he understands now that he has to accept this and move on. Meanwhile, Leonard the security guard has a daydream of his own where he is the boss.

Aside from the premiere "I Want To Be Here", this is the second episode of Season Four to not have the "Meet Rebecca!" opening theme song.