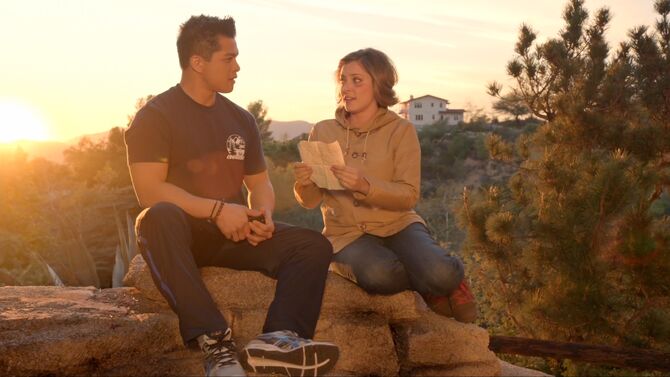 I'm Back at Camp with Josh!

At Cup of boba, Paula is excited that Rebecca is now honest about her feelings for Josh. The object of her affection then unexpectedly shows up to the shop to purchase a few things. Josh tells them every year he volunteers at a camp for at-risk youths and is stocking up on supplies for his charges. Paula suggests Rebecca could volunteer too and Josh tells them he'll set up a meeting with the camp director. He goes home to pack up only to have Valencia criticize him for wasting valuable time he could be earning money. This bothers Chan who questions why she never seems to believe him. Meanwhile Rebecca bribes her way into securing a spot at the camp to give a Women Empowerment seminar.

Over at Greg's place, he and Heather are in bed canoodling when she tells him she wants them to be exclusive. Later at Home Base Greg mentions to Hector and White Josh that he's now on break with Heather. His friends point out how commitment-phobic he is just as Darryl walks into the bar. Upon hearing they are unable to afford a boxing PPV he invites them all to his place to watch it. Elsewhere, Paula drops Rebecca off in her minivan at the meeting area where the teens and counselors are boarding busses to go to the camp. Rebecca mentions she intends to show Josh a love letter she wrote to him on their last day of summer camp. When Josh shows up he declines Rebecca's offer to ride together since he's going with the boys he's in charge of. She then meets some teenage girls who openly mock her.

Over at Darryl's place he gets ready for his party by preparing his patented spread (♫ Having a Few People Over ♫). However, not long after his guests arrive they get bored by the PPV and try to leave to hook up with some girls. Darryl convinces them to stay assuring them he can get women to show up. He finds an escort service online called "Sofistic8ted Party Casting" and places a large order. Back at camp Josh organizes a tandem elbow tag activity and Rebecca gets stuck with a big kid called Nikki. During the contest Nikki accidentally strikes Rebecca in the face giving her a black eye. Rebecca is later forced to have lunch at the teenage girls table while Josh sits with his charges. She notices Josh taking photos with his boys and asks the teens about the perfect spot to take a selfie.

They tell her about a place called "Blowie Point" which Rebecca doesn't realize is a specific type of hook up area. Over in Darryl's apartment Greg, Hector and White Josh are enjoying the company of the women he hired. Greg recognizes one of them to be a girl he loved since kindergarten names Ashley Pratt. She doesn't recognize Greg despite remembering Hector and White Josh. Greg manages to charm her anyway and asks Ashley to join him for a drink. Back at camp, Rebecca manipulates Josh into going up with her to Blowie Point so they can take a sunset selfie together. Rebecca calls Paula with an update and mentions she's going to show Josh the letter. Paula tries to warn Rebecca both about her plan and noticeable bug bites she is covered in.

Rebecca passes out due to an allergic reaction to the bites and wakes up in the camp's medical center. She learns from a nurse that the female teenagers dragged her there and runs off to her rendezvous with Josh. He is there when she arrives and suggests they wait for the sun to go down for their selfie. To pass the time she reads the letter she wrote to him a decade ago (♫ Dear Joshua Felix Chan ♫). She is crushed when Josh laughs at it considering it part of the dumb teenage stuff they grew out of. Hurt by his response, she leaves to give her female empowerment lecture and tosses the letter in the trash. When Rebecca shows up to the camp auditorium she is heckled by the teenage girls in attendance. Still reeling from Josh's reaction to her letter she has an emotional breakdown on stage.

At the party Greg and Ashley hit it off until she tells him she could see a future for them together. Back at camp the girls comfort Rebecca and decide to give her a makeover to lift her spirits (♫ Put Yourself First ♫). Once they finished Josh appears and asks to speak with Rebecca. When they are alone Josh tells her he retrieved her letter and was genuinely moved by it, particularly when she wrote that she believes in him. He thanks her for never trying to change him and gives her a kiss on the cheek before leaving. The teenage girls were eavesdropping and disappointed nothing further happened but Rebecca is overjoyed. In Darryl's apartment the party is over and he and White Josh bond as they finish cleaning up. Before White Josh leaves he plants a kiss on Darryl's cheek.

The next day Greg finds Heather and apologizes for running away. He asks for a second chance and after making Greg squirm for a bit she takes him back. Josh arrives at home emboldened by Rebecca's letter. He confronts Valencia and makes it clear he plans on continuing to volunteer at the camp every year. At Whitefeather & Associates, Rebecca tells Paula about the kiss on the cheek Josh gave her. Darryl overhears part of their conversation and is intrigued when Paula starts to explain the acts significance. Darryl interrupts seeking answers for his own confusing situation. Paula says that in sometimes it could mean nothing but in others cases it could mean everything. This leaves Darryl uncomfortable and Rebecca hopeful about what might happen next.

“We meet at sundown...and so I reading letter and he laughing at me and I'm saying 'Corn Pops, blah, blah, blah' but I'm meaning 'You just broke my heart again'!”— Rebecca

Retrieved from "https://cxg.fandom.com/wiki/I%27m_Back_at_Camp_with_Josh!?oldid=16794"
Community content is available under CC-BY-SA unless otherwise noted.