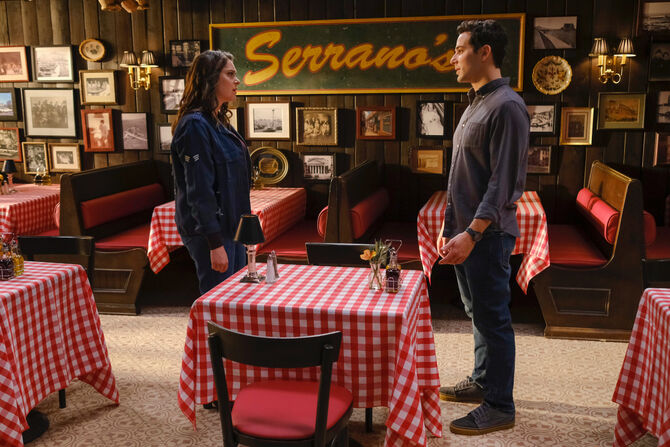 Rebecca and Paula consult each other about which clothes to wear for the audition and interview respectively. Valencia thinks that Beth is going to propose to her soon, but ends up disappointed when Beth only proposes to move to New Jersey. This makes Valencia also audition for the musical to avoid going with Beth.

Nathaniel is still helping at the local county jail and one of the inmates thinksbelieves that he and Rebecca have a chance to be together. Josh joins the play as the tech behind the scenes to be closer to Rebecca and meanwhile, Heather assists Greg with the opening of his Italian restaurant.

Rebecca and Valencia go to the theater with Rebecca being sure that the musical will make her happy. There they see Josh and find out that Tim is also auditioning for the musical. The director asks all the candidates to sing the same song (♫ Let Me Be In Your Show ♫). Nathaniel enters the room to give some papers to Rebecca and the director asks him to play the prince in the play. Then he reveals to Rebecca that he has some experience with musicals at college where he played Jesus in Jesus Christ Superstar and The Godspell.

Meanwhile, Paula waits for the job offers from other firms, but also from Darryl. He takes her out for a dinner to convince her to choose to stay at her old firm. At the musical Rebecca gets to sing a song about Etta Mae, but while learning the lyrics she realizes that it's misogynistic (♫ Etta Mae's Lament ♫). She tries to get the director on board with changing the lyrics, but the director refuses and asks her to sing the song as it was written. The cast rehearses the musical with a montage (♫ The Tick Tock Clock ♫).

On the opening night, Josh gifts her an old playbill he bought online and asks her to sign it. Rebecca thanks him for being there for her. April, Darryl and Paula arrive to watch the play and Paula talks about the job offers she had received. The musical starts with Valencia performing the first song about a pirate king who takes advantage of his wife (♫ I'm the Bride of the Pirate King ♫). Beth later meets her backstage and Valencia gets mad. Tim performs his song (♫ Apple Man ♫) during which Darryl realizes that he hates the constant changes at the firm, with Paula always being there and that's why it's hard for him to let her go.

Rebecca is reluctant to perform her song and Nathaniel encourages her to sing her version of the song and when she decides not to, he goes to the stage and sings here version (♫ Etta Mae's Lament (Revised) ♫). The director gets mad and closes the curtain before he could finish the song and fires Rebecca and Nathaniel.

Elsewhere, Greg opens the restaurant with Heather's help with many guests present to his surprise. Greg believed that the restaurant failed in the past because the city turned its back on his father, but Heather reminds him it failed because his father was a terrible businessman and an alcoholic and that Greg never really hated West Covina, he only hated himself. (♫ What'll It Be (reprise) ♫). Then he decides to stay in West Covina for good.

Nathaniel admits to Rebecca that he joined because he wanted to spend more time with her. This leads to him almost kissing him, witnessed by Josh. Valencia tells Beth that she wants to get married and expects her to propose. Meanwhile, Paula reassures Darryl that she'll always be his friend regardless of where she works.