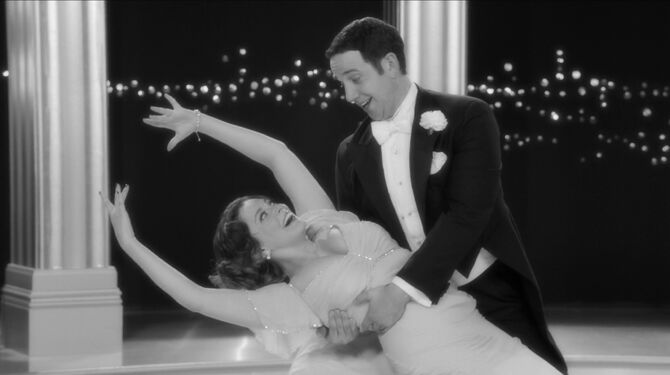 I'm Going on a Date with Josh's Friend!

Heather Davis is in her junior college abnormal Psychology class presenting a case study she made on her next door neighbor Rebecca Bunch. The teacher reprimands her for describing her subject in negative non-clinical terms. Heather believes the words to be appropriate and wonders aloud about Rebecca's origins (♫ Crazy Ex-Girlfriend Theme Song ♫). Over at the skate park, Paula tries to help Rebecca practice skate boarding so she can impress Josh. They are interrupted by a phone call from Rebecca's mother who criticizes her impulsive move to California. Hurt by her mom's disapproval she leaves to wallow in self pity. On her way back home Rebecca bumps into Heather who is returning from school.

Heather suggests that to cheer herself up Rebecca should use an online dating service to score a casual hook-up with a stranger. She arranges a date with a guy named Jason and takes him home (♫ Sex with a Stranger ♫). However, she is inspired by another butter commercial to make healthier choices and kicks Jason out. Meanwhile at Home Base, Chris is egging Greg to go through with his end of a deal they made to ask a girl they like out. Josh shows up and tells Greg about needing to find a job soon or he'll have to work at his father's radiology lab. Josh learns from Greg and Chris’s pact and encourages his friend to ask Rebecca out. When Rebecca herself shows up she announces her intentions to make healthier, better choices from now on.

Upon hearing this Greg decides to ask her out but she's reluctant to accept (♫ Settle For Me ♫). Taking a break from job hunting, Josh heads to his favorite hang out the Aloha Tech Center and finds out that they are hiring. He grabs an application and heads to Whitefeather & Associates to get Rebecca to help him fill out an essay portion. While he's there he tries out her treadmill desk and convinces Rebecca to go out with Greg. Sometime later she goes with Greg to the West Covina Taco festival. Despite her initial trepidation she enjoys herself on the date. Meanwhile, Josh's application is rejected by Alex the store manager specifically because of the pompous essay Rebecca wrote.

At the taco festival, Rebecca convinces Greg to go a Guacamole competition and they split up to sample the two finalists submissions. She meets a male competitor named Xander who is also a practicing vegan who flirts with Rebecca. When she reunites with Greg he teases her about her sudden shift in life style choices. Seeing how upset she got he apologizes for hurting her feelings and the matter seems to be resolved. Rebecca excuses herself to use the port-a-potty and while inside struggles with whether or not to be with Greg (♫ Settle For Me (reprise) ♫). Her anxiety causes her to break her vegan diet and is caught by Xander eating a beef burrito. She impulsively decides to abandon Greg and take Xander home to have sex.

Sometime later, a furious Greg confronts Rebecca having just seen Xander leaving her place. He tells her how appalled he is at her behavior and disappointed she never gave him a real chance. Meanwhile, Josh is told by the store manger Alex that he didn't get the job at Aloha specifically because of the essay portion Rebcca wrote. He is forced to get a job at his father's Radiology lab and has to deal with it's depressing atmosphere and patients like Irving. He posts a photo of his first day on his Instagram account. Rebecca sees the photo and drags Josh back to the Aloha Tech Center to confront the manager. She gives an impassioned speech and actually convinces the manager to hire Josh. Afterwards, Josh thanks Rebecca and tells her he's glad she moved to West Covina.

Later, Paula and Rebecca are in the Whitefeather & Associates break room eating bacon covered glazed donuts. Rebecca ignores a phone call from her mother and Paula congratulates her for making a healthy choice. Back at Junior college, Heather is presenting her case study of Rebecca again but this time is far less critical. She is unwilling to put Rebecca's psychosis in definitive psychological terms claiming she defies traditional classification. Her teacher disagrees with Heather's assessment believing Rebecca to have serious mental health issues. Heather responds that she'd rather just be Rebecca's friend and not put any labels her. She then decides to quit the class and walks out.

Retrieved from "https://cxg.fandom.com/wiki/I%27m_Going_on_a_Date_with_Josh%27s_Friend!?oldid=15195"
Community content is available under CC-BY-SA unless otherwise noted.