I'm Going to the Beach with Josh and His Friends! 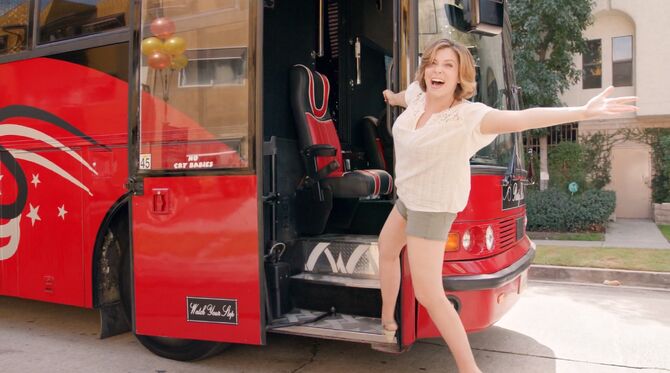 I'm Going to the Beach with Josh and His Friends!

After watching a movie about a close circle of freinds, Rebecca is sad when she notices she’s alone and everyone around her is with friends (♫ I Have Friends (reprise) ♫). As she leaves the theater she spots Josh and his crew lounging outside. Valencia is annoyed when Josh invites Rebecca over. To everyone's surprise she invites Rebecca to go with them to a beach trip they just planned. When Rebecca leaves Valencia explains she's doing this because felt pity for Rebecca and wanted to help her out (♫ Women Gotta Stick Together ♫). Later at Whitefeather & Associates Paula warns Rebcca it's some kind of trap. She also states she's done helping her until Rebecca openly admits, at least to her, that she loves Josh.

Darryl overhears the discussion about the beach trip and asks if he can come along. Rebecca tells him no but does end up taking his advice and rents an expensive Party bus for the trip. She arrives to pick them all up in the bus just as his friends are loading up his SUV. On the way to the beach Greg has the bus driver pick up his date Heather which surprises Rebecca. With the two couples paired off, Rebecca tries to connect with White Josh but finds the conversation dull. She recruits another person to talk to by inviting Darryl onboard the bus. He followed them all to the beach in his car only to run out of gas. Unfortunately, Rebecca again finds herself the odd person out when Darryl and White Josh hit it off.

Whrn she notices Valencia canoodling with Josh Rebecca's competitiveness kicks in. Utilizing a stripper pole installed on the bus she performs a very suggestive dance which disturbs everyone onboard (♫ Sugar ♫). Once it was over Valencia accuses Rebecca of blatantly trying to seduce Josh. Rebecca proclaims her disinterest in Josh listing the various flings including a vegetarian, Jason and before him Greg. Josh is bothered that Greg and Rebecca already hooked up since he had encouraged them to date. Greg points out that Josh himself never brought up the fact that he dated Rebecca when they were teens. Disturbed by Josh's reaction, Valencia pulls him away for a private conversation.

She suspects him of being jealous but Josh denies it and says he just doesn't like Greg keeping secrets. Greg himself is irritated by Josh telling Heather that Chan always feels the need to be in charge of the crew. Heather is unsympathetic and annoyed at all the drama going on. The only pair not affected by Rebecca's dance is White Josh and Darryl who are enjoying each other's company. Feeling she ruined everything, Rebecca calls Paula from the restroom to pick her up. However, her friend refuses to offer any assistance unless Rebecca admits her true feelings. Rebecca refuses still in denial over her motivations and Paula hangs up on her. She left the restroom only to find Greg and Josh arguing.

Valencia intervenes and points out that the entire situation is Rebecca's fault. She directly asks Rebecca exactly why she moved to West Covina in the first place. Rebecca reiterates the explanation that she got a great job offer she couldn't refuse. Darryl corrects her this time and reveals that Rebecca contacted his law firm desperate for a job. Rebecca is then forced to admit the partial truth, she moved because she was unhappy in New York. She fell in love with the idea of West Covina as Josh had described it to her and only lied because she knew it would make her look crazy. The others mull over her explanation as the bus reaches its destination.

When everyone disembarks for the beach, Josh stays behind to have a private conversation with Rebecca. He confides in her that he understands why she moved as he wasn't happy living in New York either. Josh says that he's proud to have been the one to have introduced Rebecca to his hometown and adds he's happy that she's here (♫ West Covina (reprise II) ♫). He leaves to join the others with Rebecca following not long afterwards basking in what Josh just told her. She finds Paula outside waiting for her and tells her what happened. Instead of being angry at her for lying to him Josh not only forgave her but also opened up more to her. Rebecca then finally admits to herself and Paula that she loves Josh.